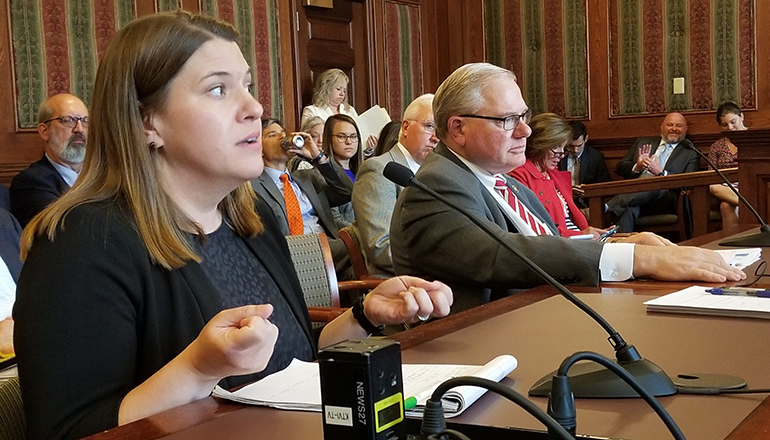 The first bill brought up for a vote would extend the taxes for five years, limit the types of contraceptives available to women on Medicaid and block Planned Parenthood from participation in a state-funded family planning program. It passed 8-5, with all four of the committee’s Democrats voting against it along with one Republican, Sen. Bill Eigel, R-Weldon Spring.

Democrats opposed the bill because of the limits on contraception and Planned Parenthood. Eigel opposed it because he thinks those provisions could be strengthened.

The second bill to come to a vote only included the five-year extension of the taxes. It passed 11-2, with the opposition coming from Eigel and Sen. Tony Luetkemeyer, R-Parkville.

The votes came on the second day of a legislative special session called by Gov. Mike Parson to extend the provider taxes. Parson wants the session wrapped by Wednesday so it is certain that the taxes, in place for 30 years, will continue in the coming fiscal year.

Action now moves to the full Senate, with the chamber set to start debate at 9 a.m. Friday. If all goes as planned, a final Senate vote will take place Saturday and the Missouri House will vote next week.

During the regular session, extending the taxes, in place for 30 years, became embroiled in abortion politics when some Republican lawmakers sought to use it as a vehicle to enact limits on some contraceptive medications and devices and to bar Planned Parenthood from providing services to any Medicaid client.

The provider taxes, imposed on hospitals, pharmacies, nursing homes, and ambulance services, are known as the federal reimbursement allowance. During the hearing, lawmakers were told the taxes would provide $1.5 billion toward the state’s share of the $11 billion Medicaid program in fiscal 2022.

And on Thursday, the issue was not whether to extend the taxes. Instead, the question is whether to keep the provisions on contraceptives and Planned Parenthood and whether they need to be altered.

Republicans hold more than two-thirds of the seats in each legislative chamber and as a party, are strongly anti-abortion. But the issues raised by the bills split the GOP.

Some members view the medications and devices banned by the legislation as essential for women who want to plan their pregnancies.

“Women in the state of Missouri need, want, and deserve contraceptives and I really don’t want contraceptives to be part of this,” said Sen. Jeanie Riddle, R-Mokane. “I want to pass the FRA clean.”

But other Republicans consider the use of medications or devices after intercourse to be abortion. They are taking their lead from Missouri Right to Life and that the vote will be rated by that group for future elections.

“We are not going to take the risk of sacrificing innocent human lives with our tax dollars,” Susan Klein, executive director of Missouri Right to Life, said during her testimony.

The hearing witnessed one unusual convergence, with Missouri Right to Life and Planned Parenthood arrayed together in opposition, albeit for very different reasons.

Klein and other abortion opponents argue that the provisions of the bill, identical to the language used in Parson’s call for a special session, were too weak. The provisions to block Planned Parenthood from providing state-paid family planning services only applies to an $11.5 million program that already excludes the organization.

They want it applied to the Medicaid program as well.

Sam Lee, of Campaign Life Missouri, said he has been working since the 1980s to prevent Planned Parenthood from providing taxpayer-funded services.

“I am against funding Planned Parenthood because they kill babies,” Lee said.

Representatives of abortion rights groups opposed the bill because they see no need to limit access to contraceptive treatments or block women in the Medicaid program from using the services of Planned Parenthood.

Mae Winchester, an obstetrician, and gynecologist from Kansas City said most of the medications and devices named in the legislation will not stop pregnancy after a fertilized egg is implanted in a woman’s uterus. In most instances, she said, when used as intended the medications and devices will prevent fertilization, either by killing or blocking sperm or preventing ovulation.

“Access to and ability to afford birth control is one of the best things we can do to decrease abortion,” she said.