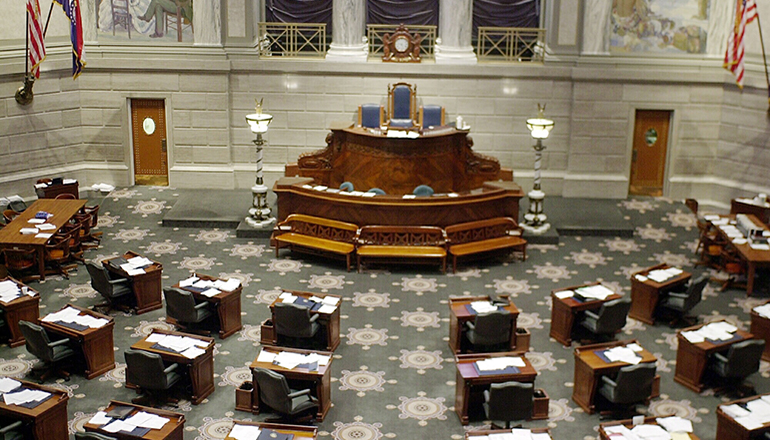 (Missouri Independent) – With a deadline looming that could cost Missouri almost $2 billion in federal education aid, the bill to distribute the money passed the state Senate on Wednesday after Democrats slammed a zero-dollar funding line as a partisan attack on Planned Parenthood.

The $4.6 billion spending bill approved on a 25-7 vote is the first legislation requiring the signature of Gov. Mike Parson to pass the Senate since the session opened on Jan. 5. The body has been wracked by factional fighting among Republicans over issues as big as congressional redistricting and as small as the Senate dress code.

The opponents were the seven Republicans in the conservative caucus. The budget debate took place after one caucus member, Sen. Mike Moon, R-Ash Grove, said he would apologize individually to other members for breaking decorum and wearing overalls to the chamber. He was restored to his committee assignments.

No action took place in the Senate Tuesday as Moon protested his punishment.

The spending bill provides the money Parson requested to increase the base pay of state jobs to $15 an hour and give a raise of 5.5% to all current employees. It also pays the $1.5 billion cost of maintaining the Medicaid program through the end of the fiscal year and distributes the federal education funding.

Before the vote Wednesday, House Budget Committee Chairman Cody Smith said time was dwindling to pass the bill, which is already three weeks past the date when Parson wanted to start the raises. The Medicaid program, he said, will run out of money in about three weeks.

“It is urgent, very urgent,” he said in an interview with The Independent. “It is my understanding that we are now looking around the middle of March we might run out of money for Medicaid.”

The deadline for appropriating a $1.9 billion fund of federal education aid is March 24.

The factional battle in the Senate has led the body to meet for hours on many days without taking care of routine tasks such as approving the journal of the previous day’s business. The fight over whether Planned Parenthood can be a Medicaid provider, a years-long effort by Republicans that has been repeatedly stymied, was jokingly welcomed by the participants.

“You know how you feel kind of rusty, since the process has been stalled so long,” Sen. Karla May, D-St. Louis asked Appropriations Committee Chairman Dan Hegeman.

“I am glad we are working on the floor,” Hegeman replied.

The latest approach devised by abortion opponents to cut Planned Parenthood out of the Medicaid program is to insert an appropriation of zero dollars for services from providers described in a way that only fits the nonprofit organization that provides reproductive health care.

Language from a fiscal 2019 appropriation bill cutting Planned Parenthood off from the program was declared unconstitutional by the Missouri Supreme Court for legislating in an appropriation bill. A memo to lawmakers from Sam Lee of Campaign Life Missouri states the new approach interprets the court’s July decision on Medicaid expansion to mean an appropriation with an amount can be used to refuse funding, like spending lines with dollar figures are used to provide funding.

The approach “fully complies with what was set forth by the Missouri Supreme Court in its unanimous Medicaid Expansion ruling,” Lee wrote.

In a telephone news conference Tuesday, reproductive rights advocates said the zero-dollar language is another example of lawmakers “weaponizing a must-pass budget bill.”

Last year, lawmakers used an essential tax on hospitals, nursing homes, and pharmacies, known as the federal reimbursement allowance (FRA), as leverage to attempt to restrict taxpayer dollars from going toward Planned Parenthood.

“In our eyes, it’s a clear violation of both federal and state laws,” said Yamelsie Rodríguez, president and CEO of Planned Parenthood of the St. Louis Region and Southwest Missouri.

Sen. Jill Schupp, D-Creve Coeur, tried to strip the zero-dollar appropriation from the bill, an amendment that was defeated on a 10-23 vote. She argued the provision violated state and federal rules for the program, which require accepting any qualified provider willing to treat Medicaid patients.

The language was inserted, Schupp said because Republicans knew Democrats would not block passage over the out of concern doing so would mean sacrificing billions in education and Medicaid funding.

“The idea that there is a budget bill here that is under a deadline and a timeline that we have to get done,” she said.

Under questioning, Hegeman admitted that the language is likely to be challenged in court. He would welcome it, he said.

“I want a decision on it because I do really feel there is a conflict right now,” he said.

During the debate, Hegeman said he anticipates the House will be able to accept the Senate changes to the bill without negotiations by a conference committee. The House could vote on the bill as early as Thursday.

The bill sent back to the House does not specify a base wage for state jobs. The version passed in the House set it at $12 an hour for most jobs and reserved $15 an hour for jobs involving direct care of people in state institutions like veterans homes and mental health hospitals.

Parson had asked lawmakers to pass the spending bill in time to include it on the pay periods that began Feb. 1. That would have also covered an anticipated earlier depletion of Medicaid appropriations and met the education funding deadline.

As written, the language will allow wages to “go to the market rate, wherever that happens to be,” Hegeman said.

Veterans homes are turning away residents because of staffing, while corrections officers and mental health aides work long hours to cover shifts for unfilled positions, he said.

“A little overtime is great and a lot of overtime is not so wonderful because it wears you out,” Hegeman said.

After the bill reaches Parson, the raises would go into effect as soon as they could be processed.

The bill includes $1.5 billion to pay bills for the Medicaid program, including low-income adults enrolled under expanded eligibility since it was implemented on Oct. 1. Medicaid funding has lasted longer than anticipated in January because only 66,489 people have enrolled in the expanded program instead of the anticipated 250,000. While it is unlikely providers would abruptly stop services if the state delayed payments, Smith said, it is a headache that should be avoided.

“Delays in payment, other disruptions,” Smith said, “those are not problems we want to have to navigate.”