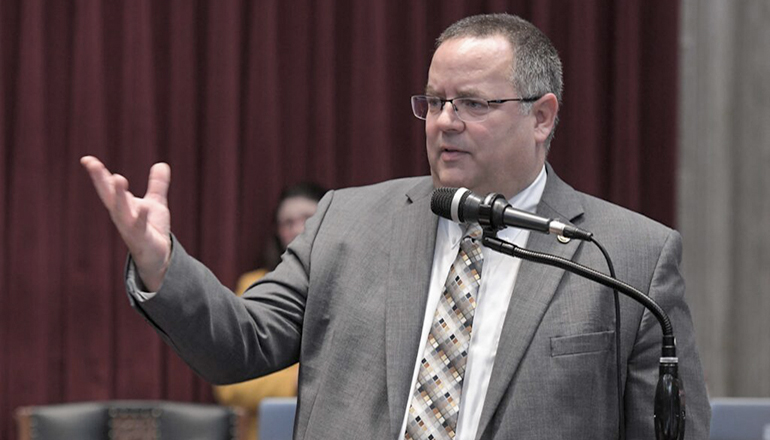 (Missouri Independent) – Missouri House members are not ready to accept the congressional redistricting map approved by the state Senate.

The House met Monday without voting on the Senate plan, approved Thursday at the end of a Senate session that lasted almost 24 hours.

“We had a good conversation in caucus,” Shaul said, but members have issues with the plan that differs sharply from the plan approved in the House in late January.

“The House is going to continue to review the work of the Senate,” Shaul said in an interview with The Independent.

If it had been brought to a vote, she said, a majority of the chamber’s Democrats would have voted against it.

Democrats do not feel it is representative of the state’s political split – about 40% of voters supported Democrats in the 2020 statewide contests. The map approved in the Senate, as well as the one approved in the House, would likely produce a delegation with six Republicans and two Democrats.

The decision to put off any House vote on the map – whether to approve it or seek negotiations to iron out differences – ends any chance of the eight districts being set for the fall elections before filing closes at 5 p.m. Tuesday.

Only a quick House vote, with approval of the emergency clause to make it effective immediately, followed by a signature from Gov. Mike Parson could have put the map in place before filing closes.

The House approved its version of the map on an 86-57 vote that included several Democrats in support. The obvious split among Republicans in response to the Senate map puts Democrats in a position of strength for negotiations, Quade said.

“As of now, we are kind of waiting and seeing,” Quade said.

The uncertainty didn’t stop additional candidates from filing Monday, with six new candidates for Congress adding their names to the 56 who had filed by the end of business on Friday. The most prominent new entrant was state Sen. Steven Roberts of St. Louis, who filed in the 1st District Democratic primary against U.S. Rep. Cori Bush.

Bush shocked the Missouri political world when she defeated 20-year incumbent U.S. Rep. Lacy Clay in the 2020 Democratic primary. A progressive, she has joined with well-known female progressives in “The Squad” – Alexandria Ocasio-Cortez of New York and Ilhan Omar of Minnesota, Rashida Tlaib of Michigan, and Ayanna Pressley of Massachusetts.

“We all had the highest hopes for Congresswoman Bush but she’s shown over the past year and a half that she’s not interested in the job of United States Representative,” Roberts said in a news release after filing.

Roberts brings baggage to the race in the form of accusations made in 2016 by the late Cora Faith Walker that he had sexually assaulted her. The Intercept reported last week that Roberts’ Wikipedia page has been edited repeatedly, by someone with a state government IP address, to remove references to the accusations.

Roberts has denied making the edits.

The 4th District, under the Senate plan, would have only a portion of Boone County, the state’s seventh most populous county, while in the current district and the House plan, it is wholly within the 4th District.

The homes of two Boone County candidates already filed in the 4th, Taylor Burks, and state Rep. Sara Walsh, R-Ashland, would shift to the 3rd District if the Senate map is approved.

Other big changes include splitting Webster County in southwest Missouri between the 7th and 8th districts, adding residents of eastern Jackson County to the 4th District for the first time. The Senate map also redraws the 2nd District, currently parts of St. Louis and St. Charles counties, to include Washington, Iron, St. Francois, and a portion of Franklin counties.

The goal of a map is to produce eight districts with populations as close as possible to the ideal of 769,364. The plan must protect minority representation, and districts are supposed to be as compact and contiguous as possible.

There are no legal requirements for partisan fairness in the design of the maps. The term gerrymandering describes districts drawn to bring voters together who are likely to support one party over its competition.

The only residency requirement for Congress is to live in the state, not the district.

If lawmakers do not agree, it is possible that state or federal courts will intervene. Two lawsuits have been filed in Cole County asking state courts to draw the lines. If it goes to the courts, Quade said, Democrats could benefit.

“We are willing to have conversations with Republicans,” Quade said, “but they haven’t talked to us yet.”