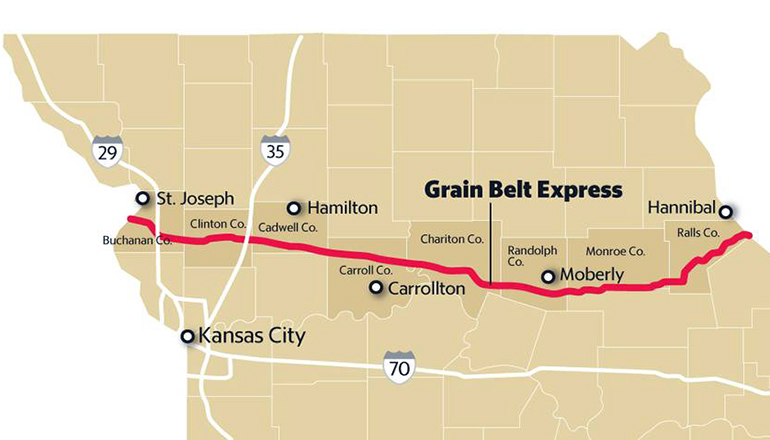 (Missouri Independent) – The Missouri Senate is poised to take up a long-running effort to stymie the Grain Belt Express, a massive transmission line meant to carry wind energy from southwest Kansas across three states.

The $2 billion project would carry 4,000 megawatts of energy, dropping some off in Missouri before ending at the Illinois-Indiana border. It’s been in the works for nearly a decade.

But it faces opposition in Missouri from legislators, agricultural groups, and commissioners in counties along the line’s route who argue it shouldn’t be able to use eminent domain to acquire easements to build on the properties of landowners who don’t want to negotiate.

On Tuesday, a Senate committee heard testimony on legislation that would increase compensation to landowners, require that 50% of the power from such a transmission line be used in Missouri, sunset projects’ approval if they don’t begin construction quickly enough, and allow county commissions to, in essence, override state approval for Grain Belt Express.

“Missouri landowners’ property rights should never be for sale to the highest bidder,” said Marilyn O’Bannon, a Monroe County commissioners and landowner. “I can’t describe the stress that has been on the backs of landowners for the past eight years.”

The Missouri House already passed the legislation last month. The Senate’s Rules, Joint Rules, Resolutions, and Ethics Committee could vote to send the bill to the floor for debate as soon as Thursday.

The bill ran out of steam in the Senate last year when the chamber collapsed due to GOP infighting during the final week of the 2021 session. But when asked about priorities for the rest of the 2022 session in a press conference last week, Senate Majority Leader Caleb Rowden, R-Columbia, specifically pointed to the eminent domain bill and said the Senate would “push that through.”

But supporters of the Grain Belt Express project argue the legislation violates both the U.S. and Missouri constitutions and would unravel a project poised to create construction jobs, deliver millions of dollars in property taxes to local governments, and provide clean energy and lower rates to dozens of Missouri cities.

Donna Ingles, a landowner in Randolph County, said she and her husband had been treated respectfully and professionally in their negotiations with Invenergy, Grain Belt’s developer, for an easement on the couple’s property. She said the project would provide necessary jobs and renewable energy.

Ingles said she didn’t “jump up and down” when gas pipelines went across her property and farmers would have to deal with structures from the transmission line. But progress requires sacrifice, she said.

“Had our ancestors never sacrificed, never told that electric company…you can go across my land, you and all would still be reading by that kerosene lamp and walking outside to go to the bathroom,” Ingles said.

Grain Belt was granted the right of eminent domain by the Missouri Public Service Commission in 2019. The Kansas Corporation Commission has also given its approval.

So while Invenergy said it hopes to reach voluntary agreements with as many owners of the 1,700 parcels of land the line would cross in those two states, it can file condemnation proceedings against landowners for easements on their properties.

Grain Belt has reached voluntary agreements for 1,200 of the 1,700 parcels, said Patrick Whitty, a spokesman for the project. And Grain Belt Express LLC has filed condemnation proceedings on 12 parcels and reached settlements in two of those cases.

The line pays 110% of market value for easements on the properties and $18,000 for each structure.

But critics of the Grain Belt project who support the bill argue that the company building the line, Invenergy, shouldn’t be granted eminent domain because the project doesn’t benefit the public good of Missouri.

“Eminent domain was always intended to be used as a last resort for critical needs and infrastructure of the state, not as a way for private for-profit companies to take private land for private gain at the expense of landowners,” said Mike Dearing, executive vice president of the Missouri Cattlemen’s Association.

Supporters of the project argue it is in the public interest. More than three dozen Missouri cities will get power from the line, saving millions for their customers each year. Whitty said the line’s power capacity equates to 15 million barrels of oil each year.

“Right now inflation and a lack of energy independence are huge issues in this state and country,” Whitty said. “…This project is both in the interest of Missourians’ pocketbooks as well as our energy security.”

Nichole Luckey, vice president of regulatory affairs for Invenergy, said the bill included some good policy proposals, such as increasing compensation for landowners.

“But unfortunately,” Luckey said, “as drafted, the vast majority of this bill is simply a hammer designed to kill the Green Belt Express project masquerading as eminent domain reform.”