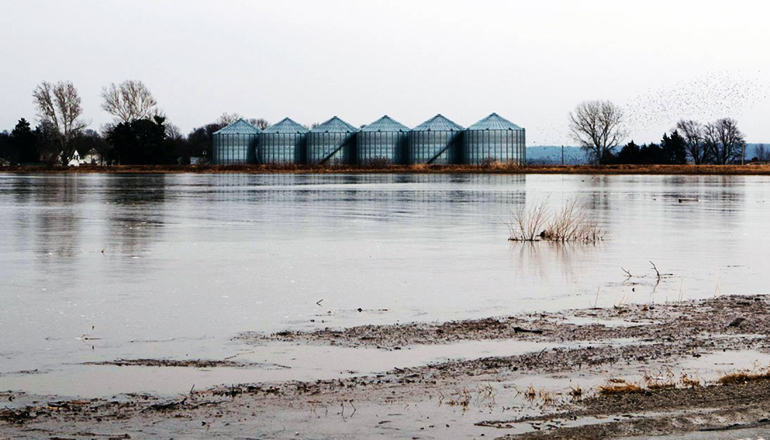 For as long as man has been measuring the Missouri River, the stretch flowing through northwest Missouri has never been this high. The third week of March, farmers watched helplessly as their homes, land, buildings and stored crops went under water. With very little warning, the river went from normal levels to breaking all-time records.

This is no run-of-the-mill flood. To put it into perspective, the mammoth 1993 floods peaked at 25.3 feet on the Rulo, Nebraska gauge across the river from Big Lake, Missouri. That mark was about three feet lower than this year’s new record of 28.1 feet. The 2011 flood that set the previous record was so bad that some farmers have still been working to repair their fields eight years later. The current flood beat that record by almost a foot, allowing rising waters to breach or overtop levees with ease.

Corps of Engineers authorities described this situation as a “perfect storm.” Heavy rain in Nebraska and Iowa fell on frozen or saturated soils. The water could not soak into the soil, so it immediately ran into streams as if it had fallen on concrete. Much of the rain fell below the Missouri River’s main flood control reservoirs. With no dams to hold it back, the Corps could not regulate the river’s flow. Snowmelt in the upper basin only made a bad situation worse.

Unfortunately, “perfect storms” are becoming all too common. Six of the top 10 floods measured at Rulo happened within the past 12 years. These measurements cover about 70 years of modern river records. For many farmers in the river bottoms, flood stage is the new normal.

Every new record-setting event causes millions or even billions of dollars of damage. Some of the best farmland in the world sits under several feet of water instead of yielding bumper crops that produce food, fiber, and fuel. Full grain bins become inundated and spoiled by floodwaters. Businesses and highways are shut down, often bringing commerce to a screeching halt. We cannot afford to keep letting this happen.

Regardless of the cause of these more-frequent flood events, something has to change in the river’s management. Flood control must be recognized as critical for the operation of the river’s reservoir system. When floodwaters recede, it will be time to have serious conversations about how the system can be improved to provide better flood protection.

Upstream reservoirs should be managed to provide the maximum amount of storage capacity. In some areas, we may need more substantial levees and flood control structures. We can debate the specific solutions, but protecting life and property should be our undisputed top priority. River bottom land is too important to Missouri to be continuously under water.