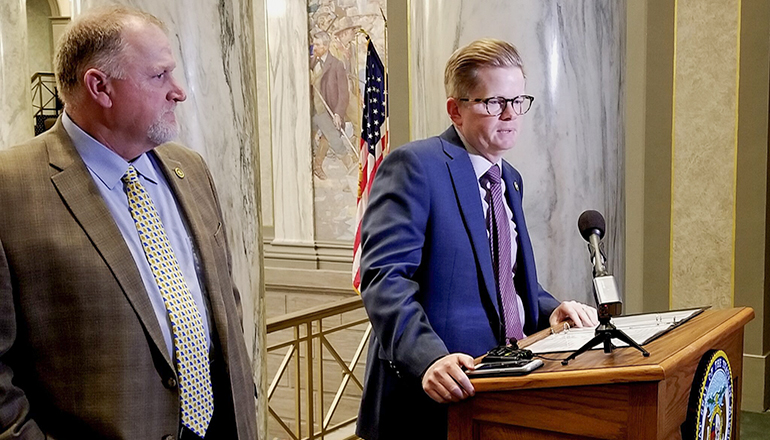 (Missouri Independent – The simmering division among Republicans over a bill crucial to funding Missouri’s Medicaid program boiled over this week, with the state senator at the center of the debate calling for a change in the chamber’s leadership.

Sen. Paul Wieland, R-Imperial, led the charge to include language banning the use of taxpayer money for certain contraceptives on a bill extending a Medicaid provider tax that generates nearly $2 billion every year.

Wieland’s amendment eventually sank the tax extension’s chances of passing before the session ended — and will force lawmakers to return to Jefferson City to approve it before the tax expires on Sept. 30.

This week, Wieland wrote a letter to each of his Senate GOP colleagues excoriating Senate Majority Leader Caleb Rowden and Senate President Pro Tem David Schatz over how the issue was handled during the final days of the legislative session.

He accused them of “actively working with Democrats to defeat a position we had agreed upon in our caucus,” referring to an alleged deal discussed openly by Senate Minority Leader John Rizzo, D-Independence, to approve the tax without the amendment attached.

“I apologize for being foolish enough to keep Sen. Rowden apprised of my every move during the last week, only to have him be the true adversary I was fighting,” Wieland wrote.

He also apologized for nominating and supporting Schatz in his bid for president pro tem in 2019.

“Without a change in leadership, I have zero confidence that next year will be any better,” Wieland wrote. “I see no purpose in caucusing with leaders who have made it clear that appeasing Democrats is more important than working to further the majority caucus’ goals.”

“In the Missouri Senate, there are show horses and workhorses,” Rowden said. “I consider myself the latter and will continue to let others be the former. I am proud of the historic accomplishments of this year’s session and I am hopeful special session will allow us to add additional successes to this year’s list.”

Schatz called Wieland a “principled and valued member of our caucus.” He said he reached out to him directly to address his concerns.

“I am confident, even despite occasional disagreements, that our caucus will continue forward stronger than ever — uniting around our shared conservative principles,” he said.

Wieland’s letter is just the latest example of the divisions among Republicans that bedeviled the 2021 legislative session.

While Republicans celebrated a host of long-sought victories, some came over the objections of the Senate’s conservative caucus and were only possible with the help of Democrats — most notably an increase in the state’s gas tax and a prescription drug monitoring program.

The divide was best embodied by the failure to renew taxes on hospitals, nursing homes, and pharmacies that last year accounted for $2.3 billion of Missouri’s $10.8 billion Medicaid program. The tax is known as the federal reimbursement allowance or FRA.

A last-ditch effort on the session’s final day to extend the tax ended in acrimony. Proponents of the anti-contraceptives provision felt leadership was trying to box them in and force through an FRA extension without their amendment.

Democrats felt they had a deal with leadership to stick together to keep the bill clean and send it to the governor.

The proponents of the amendment eventually won out, with the help of Schatz.

Democrats, enraged over what they saw as a betrayal by GOP leadership, retaliated with a day-long filibuster that completely derailed the session’s final day.

The debate left both sides of the debate feeling double-crossed by Senate leaders.

Leadership in both the House and Senate is decided by its members, and Republicans hold 24 of the Senate’s 34 seats.

Wieland concluded his letter stating that “the future of our caucus and the Missouri Senate is in our hands.”