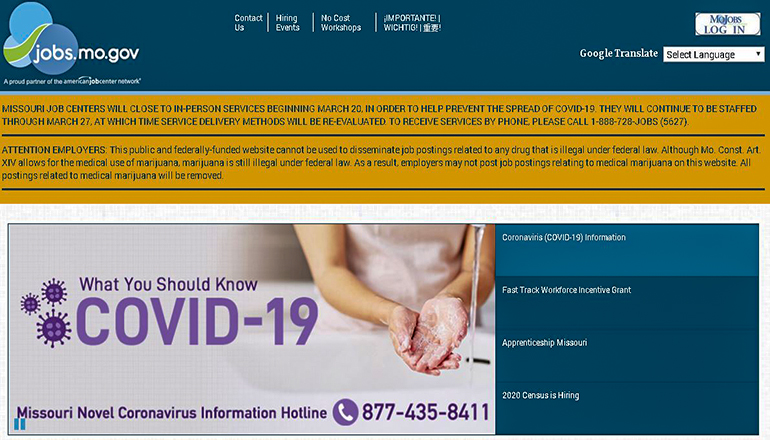 The Missouri labor market continued to recover in July 2020, following major job losses due to COVID-19 shutdowns earlier in the year. Employment, seasonally adjusted, increased by 52,200 jobs over the month. Over-the year job losses, though still substantial, have diminished as the economy has gradually reopened. Missouri’s smoothed seasonally adjusted unemployment rate decreased to 6.9 percent in July 2020 from a revised June 2020 rate of 7.8 percent, a decrease of nine-tenths of a percentage point.

Due to lingering layoffs from COVID-19 shutdowns, the July 2020 seasonally adjusted unemployment rate was still more than double the July 2019 rate. The rate had reached a record low of 3.0 percent starting in July 2018, before edging up a tenth of a point in November 2018 and again in December 2018. The rate had remained at 3.2 percent through April 2019 before decreasing by a tenth of a point in May 2019. It then began a slow increase, reaching 3.4 percent in October 2019, where it remained for the remainder of 2019. The rate was steady at 3.5 percent in January and February 2020 before the COVID-19 spike began in March 2020. The rate peaked at 10.2 percent in April 2020 before decreasing slightly in May 2020, then moving strongly lower in June and July of 2020 as COVID-19 restrictions were eased.

Read the full report at https://meric.mo.gov/missouri-monthly-jobs-report.