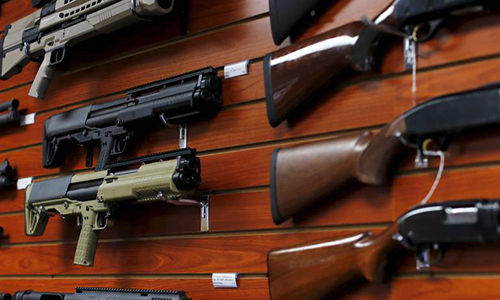 A Liberty, Missouri, man has been charged in federal court with illegally possessing firearms.

Aaron S. Calton, 43, was charged in a criminal complaint filed in the U.S. District Court in Kansas City, Missouri, on Friday, Oct. 2, with two counts of being a felon in possession of a firearm. Calton remains in federal custody without bond.

According to an affidavit filed in support of the federal criminal complaint, Calton sold 3.5 grams of methamphetamine to a confidential law enforcement source for $100 on Aug. 23, 2020. Law enforcement officers executed a search warrant at Calton’s residence on Oct. 1, 2020. As Calton attempted to flee from the residence, the affidavit says, he threw a loaded Smith and Wesson 9mm pistol into the woods near the residence. Calton was taken into custody and the pistol was recovered. Another man who fled on foot was apprehended and a woman at the residence was also taken into custody. Officers seized 15 grams of methamphetamine and a sawed-off Mossberg pump-action 20-gauge shotgun from the residence.

Calton had also been arrested while in possession of a firearm on April 6, 2020, during an investigation into his alleged plan to assault a Branson, Missouri, woman whom he believed had stolen a large quantity of methamphetamine from him. The intended victim, according to the affidavit, told law enforcement that Calton threatened to shoot her in the legs and break out all of her teeth in an attempt to compel her to say where the stolen methamphetamine was located.

Calton was a passenger in a vehicle that was stopped by a sergeant with the Missouri State Highway Patrol on Interstate 49 on April 6, 2020. The sergeant searched the vehicle and found a loaded Ruger .380-caliber pistol on the floorboard of the front passenger seat, where Calton had been seated. Calton also had six additional .380-caliber rounds of ammunition in his pocket.

Under federal law, it is illegal for anyone who has been convicted of a felony to be in possession of any firearm or ammunition. Calton has prior felony convictions for burglary/stealing and assault.

This case is being prosecuted by Assistant U.S. Attorney D. Michael Green. It was investigated by the Missouri State Highway Patrol, the Liberty, Mo., Police Department, the Clay County Drug Unit, and the Bureau of Alcohol, Tobacco, Firearms, and Explosives.