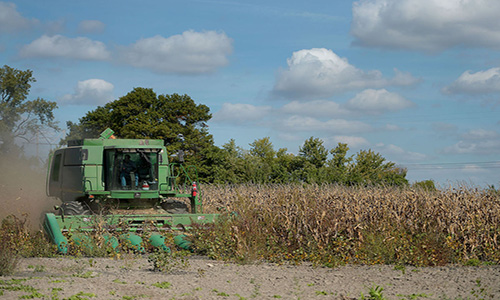 (St. Joseph News Press) – ALBANY, Mo. — A group of attorneys believes Missouri corn farmers deserve a break from financial losses they suffered from the acts of a world giant in the agrochemical industry.

The firms, including one located in central Missouri, are registering their opinions on Swiss-based Syngenta. The company, they claim, placed a particular variety of genetically modified corn onto the market — claiming the company knew the action would drive down prices through cross-contamination of the overall crop. GMOs are engineered to help grow larger crops or instill protection against insects.

Call & Gentry Law Group of Jefferson City, Missouri, held four sessions Monday with area farmers to review lawsuits filed against Syngenta. They also had the opportunity to sign up as plaintiffs in the actions.

Attorney Jason Call said the firm has teamed up on the litigation with lead counsel Watts Guerra of San Antonio, Texas.

“Essentially, the case is about corporate responsibility,” Call said.

The allegations stem from the introduction by Syngenta of the genetically modified corn organism trait Agrisure Viptera (MIR 162) in 2009.

“They knew it would cross-contaminate the corn,” he said, adding the company also realized approval could not be obtained from China — the United States’ leading importer of corn.

The trait began showing up in imports to China in 2013, with its government then rejecting the corn.

In 2014, the price-per-bushel sank to below $3.50 from a height of more than $7. However, Chinese approval of the trait in December 2014 consequently resulted in rising prices.

“This case is about the harm that was done to Missouri farmers,” Call said. Estimates are that profits reaching into the billions of dollars were erased over 1½ years.

He said other law firms are involved in similar efforts to obtain damages from Syngenta, including multidistrict litigation and class-actions — the latter of which features almost 50,000 individuals in Missouri and other Corn Belt states.

Call said the sessions being held across the state are seen as a courtesy to farmers.

“The farmers are guaranteed 60 percent of the recovery,” he said.

Attorney Chip Gentry said bellwether trials on the matter are being prepared for April 2017.

“They’re test cases for both sides,” he said. Syngenta has denied the claims, defended its use of GMOs, and is setting up depositions of company officials.

“The litigation is still in a very early stage,” Call said.

The Missouri Corn Growers Association has not taken a specific position, stating it has members representing both sides of the issue.