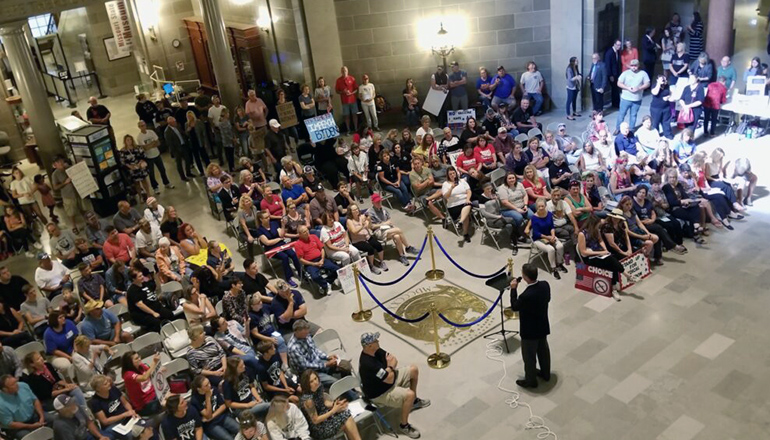 (Missouri Independent) – Members of the Missouri House on Wednesday floated the idea of pursuing legislation to undermine a mandate from the Biden administration meant to increase vaccination rates in the U.S.

The House Judiciary Committee held what Rep. David Evans said was the first in a series of discussions about vaccine mandates, including an executive order President Joe Biden issued last week directing federal workplace regulators to develop rules requiring all companies with more than 100 employees to mandate COVID-19 vaccines or regular testing.

The hearing was for informational purposes only, but lawmakers heard testimony from business groups, elected officials, and one member of the public — all opposed to vaccination mandates.

Deciding to mandate vaccines, they said, should be up to private businesses, and they claimed the federal mandate was unconstitutional. The hearing took place as protesters gathered on the first floor of the Capitol to voice opposition to vaccine mandates.

The 90-minute meeting centered largely on the difficulty employers face hiring workers amid a labor shortage. Representatives from business groups and nursing home industry groups fear a vaccine mandate will only make it more difficult.

Nursing homes have, for years, struggled with adequate staffing and face strict regulations regarding how many employees need to be on-site to care for seniors. Those that serve residents on Medicare or Medicaid are also captive to the low reimbursement rates those programs pay.

Jorgen Schlemeier, a lobbyist for the Missouri Assisted Living Association, said in the current labor market facilities struggle to recruit and retain staff who have a lot of employment options. Adding mandatory vaccines on top of that, he said, only makes things more difficult.

“It’s great that you surveyed the staff members. I’m curious what residents think of this. I’m curious what elderly, at-risk populations who we know have a much greater risk in this pandemic of dying, what they think about….having unvaccinated employees dealing with them on a daily basis.”

COVID infections in nursing homes have reached levels not seen since this winter when the vaccine was still rolling out.

Mackey was cut off as he questioned Rep. Nick Schroer, R-O’Fallon, about what steps he had taken to stop the spread of COVID-19, noting that conservative critics of the COVID mandate often invoke personal responsibility in opposing societal mandates.

“You are fond of chirping on about personal responsibility,” Mackey said. “What have you done during the pandemic as an individual to stop the spread?”

Meanwhile, Robert Wimer of Trenton, protested on the Capitol steps while about 250 people gathered in the statehouse rotunda, rallying against the vaccine mandate. Wimer, an employee of Nestle, said neither he, his wife, or his children have been vaccinated.

He objects to the mandate and says if his employer requires him to be vaccinated to keep his job, he will find a new one. He is willing to take a weekly test as an alternative, he said.

Wimer also said he would protest if the Grundy County Health Board or the Department of Health and Senior Services issued vaccine requirements.

“I would because it is not a pro or against the vaccine, but standing up for an individual’s right to do that,” Wimer said.

Inside, opponents of the mandate heard from several politicians urging them to reject Biden’s order.