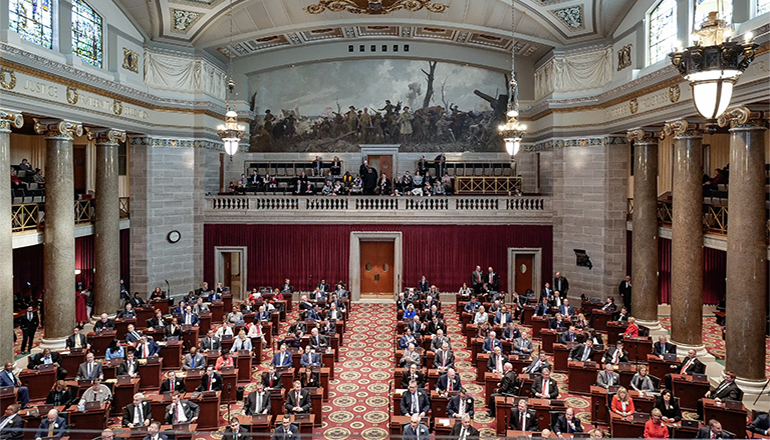 (Missouri Independent) – The Missouri House approved a $4.6 billion supplemental spending bill Wednesday that would give all state workers a pay raise.

But lawmakers refused to go along with Gov. Mike Parson’s plan for a $15 an hour base wage for all state employees, instead offering that salary only to select workers.

The bill would also provide money to support the Medicaid system through the end of the fiscal year and distribute nearly $2 billion in federal COVID-19 to schools.

The bill passed by 112-8 vote, with 30 members voting present. A final vote will be needed to send the bill to the Senate.

Only state workers in direct care jobs in four departments – Corrections, Public Safety, Mental Health, and Social Services – would be included in the plan to set $ 15 as the floor for state wages.

For other state jobs, the floor would be $12 an hour, the rate that will be the minimum wage for private employers starting Jan. 1, 2023.

All state employees will receive at least a 5.5% raise if the bill is passed.

Smith’s version of the pay raise plan will save the state about $6 million from the $98 million cost estimated by Parson when he announced it in December.

“We are investing $92 million into the state workforce to retain and attract talented employees,” Smith said.

Democrats argued that Smith’s plan would not help the state recruit the replacement workers needed as turnover increases.

“This has become a crisis, a crisis that means we are standing here with an emergency supplemental to put in raises we should have been making for a long time,” said state Rep. Peter Merideth, the ranking Democrat on the House Budget Committee.

Meredith sought to restore the cuts Smith made to Parson’s proposal but failed on a 52-96 vote. A handful of Republicans supported the amendment, including state Rep. Rudy Veit of Wardsville, a town near Jefferson City.

“I don’t know anybody working for the state who is not worth $15 an hour,” Veit said.

There are almost 700 full- and part-time state employees who are paid less than $12 an hour. The state employs the equivalent of 6,813 full-time employees who make between $12 and $15 an hour, including more than 1,100 court clerks in the judiciary, 221 administrative assistants in the mental health department, and 159 food service workers in the Department of Corrections.

At a public hearing on the bill last month, state Budget Director Dan Haug said turnover in state jobs was 26% last year, and more than double that, 55%, for employees earning less than $30,000 a year.

“It depends on what your definition of living is,” Smith responded, adding that he doesn’t think people who have jobs requiring minimal skills should be paid enough to live independently.

In an interview Tuesday during KCUR’s Up to Date program, Parson called the House cuts to his proposal a “part of the process,” but said it is the result of a lengthy planning process to respond to rising wages in the private market.

“We’ve got 45,000 state employees out here,” Parson said. “They’re good people, and the vast majority are dedicated to their jobs. We’re just like everybody else – we’re competing for a workforce and we’ve got to do a better job of it.”

During debate, Republicans defended Smith’s plan and said agencies are not limited to providing only the raises allowed by the additional appropriations. Agencies that have funds available from unfilled jobs can use that money to give raises when necessary to retain workers, they said.

The $1.6 billion in the bill to pay Medicaid’s bills through June 30 will cover the cost of expanded Medicaid eligibility and cover other shortfalls in the program. While supporters estimated that 250,000 people would enroll in Medicaid with expanded eligibility, only 62,733 people have enrolled since the Parson administration began accepting applications on Oct. 1

Anyone aged 18 to 65 who has an income less than 138 percent of the federal poverty guideline is eligible for coverage. That is $19,251 a year for a single person and $31,784 for a household of three.

The bill includes nearly $3 billion in federal aid for education programs, including $1.9 billion that must be appropriated by March 24 or the state will lose it. The bill creates a new program, with $75 million, for grants to families to pay for education programs to address learning loss during the COVID-19 pandemic.

Families with incomes below 185 percent of the poverty guideline will be given priority for the grants, which will be up to $1,500. If money remains after those applications are processed, the program will open up generally to all parents.

“We have seen a tremendous consequence of the pandemic has been learning loss,” Smith said.