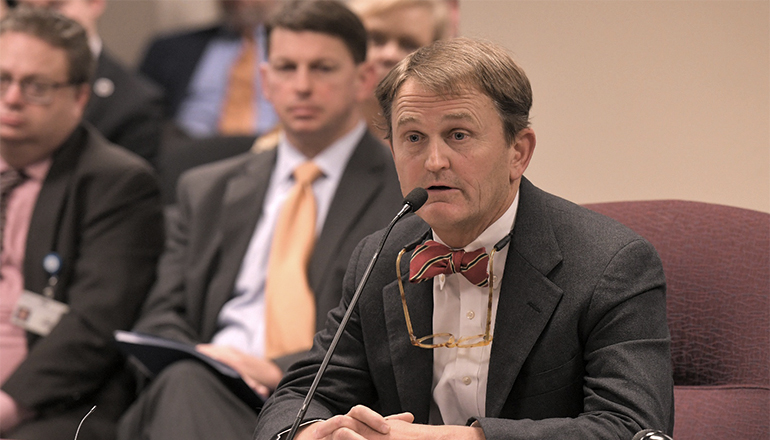 Missouri’s health director testified Monday afternoon in Jefferson City that he’s hoping for the best and preparing for the worst regarding the coronavirus.

Dr. Williams testifies there have been no confirmed cases in Missouri. About 100 people have been self-monitoring, and Dr. Williams says the department has had fewer than 15 people under investigation, which includes testing.  DHSS says about 80 people in Missouri have been evaluated by epidemiologists.

Director Williams testifies that hand washing is the key thing to remember. “When people ask me how good or bad this is, the answer I always give is I’m not going to speculate. I don’t know but I’ll tell you this,” Williams testifies. “If you will use good handwashing for 20 seconds, as described by the CDC.”

The CDC is the Centers for Disease Control and Prevention. Dr. Williams also recommends avoiding touching your eyes or mouth with unwashed hands. “We don’t have a vaccination, so that will not be available to us. We do not have antivirals that are readily available,” says Dr. Williams.

Director Williams testifies Missouri is well-prepared, noting DHSS has held daily meetings since January 27. He emphasizes that the United States has an excellent health care system, and also praises the preparation of Missouri’s health directors and providers.

Williams is not making a supplemental budget request right now, regarding the coronavirus. He tells the committee that the federal government will be offering the money Missouri will need. Williams doesn’t think DHSS will need general revenue.

During a Statehouse press conference on Monday, House Speaker Elijah Haahr, R-Springfield, told Missourinet that the Legislature will be ready if a request comes. Haahr notes he spoke about the issue earlier on Monday, with House Budget Committee Chairman Cody Smith, R-Carthage.  “If money is needed, the ability to put that in the supplemental (budget) to get that money to the people who need it quickly,” Speaker Haahr says. “I know on the federal level, there has been quite a bit of discussion about the amount of money that’s needed. Obviously, it’s going to take some time to turn around a vaccine on this.”