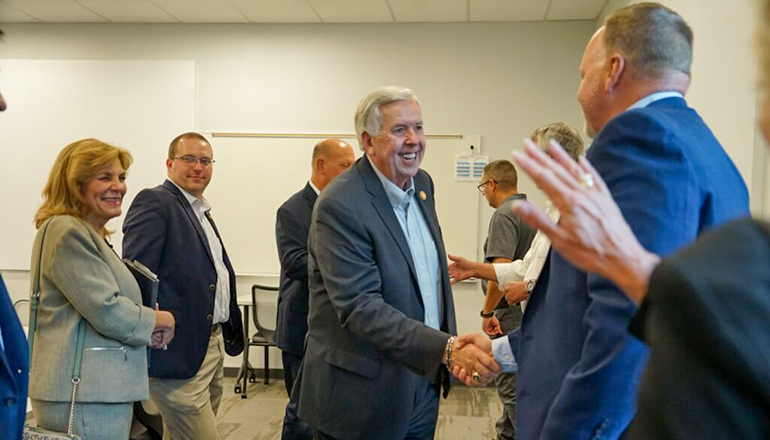 As he prepares to reconvene the legislature next month to debate a $700 million tax cut — with details about the plan expected to be announced as early as this week — Parson is hoping to avoid pitfalls that undermined a pair of special sessions he called in 2020.

He’s also navigating long-standing tension between his office and the Missouri House, as well as a combustible state Senate with hard feelings among Republicans still simmering after a bitter 2022 legislative session and contentious GOP primaries.

The governor has spent much of August trying to sell his proposal to his fellow Republicans, holding regional gatherings with GOP legislators around the state and one-on-one discussions with Republican senators.

“I think all the meetings are going positive,” Parson told reporters earlier this month, later adding: “Doing the largest tax cut in Missouri history, and still being able to maintain education, health care, all the things we’re doing, we need to get that done.”

The governor has also solicited help from one of the state’s most vocal champions of tax cuts, Rex Sinquefield.

Parson’s office asked Sinquefield — by far the state’s most prolific donor, having doled out $40 million to Missouri candidates and causes since 2021 — to meet with legislators to discuss tax cut policy.

In meetings with the governor and legislative leaders, Sinquefield brought along conservative economist Art Laffer, who is credited as the architect of the controversial tax cut package in Kansas that was ultimately repealed after years of budget shortfalls.

A spokesperson for Sinquefield could not be reached for comment.

On Tuesday, Parson’s sales pitch moved on to Senate Democrats, who he met in his Missouri Capitol office.

But he questions whether it’s time for yet another tax cut when the state has so many ongoing needs that are going underfunded. Especially, Rizzo said, when a big part of the state’s budget surplus comes from one-time federal stimulus funds.

“We have a lot of good programs we are trying to make sure continue,” Rizzo said, pointing to efforts to raise teacher pay, fund school transportation, and deal with staffing shortages that have plagued state agencies.

“Our concern,” Rizzo said, “is that when the federal money runs out, these permanent tax cuts will be more detrimental to the budget than we can realize right now.”

Parson’s plan is to lower the state’s top tax rate to 4.8%, down from 5.4%. In addition to cutting the top income tax rate, the governor hopes to raise the standard deduction to ensure a Missourian earning $16,000 or less would owe no state income tax at all.

The estimated cost of the changes is around $700 million.

The governor announced his intention to call lawmakers into a special session in May after he vetoed a $500 million legislative proposal to send tax rebate checks worth up to $500 to people making a maximum of $150,000.

In his veto letter, he argued the plan was well-intentioned but left out both lower- and higher-income Missourians and did not provide permanent relief.

To bolster his case, Parson has pointed to Missouri’s massive budget surplus. When the new fiscal year began July 1, Missouri had more money on hand than ever before, with a general revenue balance of nearly $4.9 billion.

Higher wages, historic inflation, and an influx of federal funds contributed to the bulging state budget.

Also on the agenda of the special session will be a package of agricultural tax credits that Parson vetoed in May. The $40 million tax credit legislation approved by lawmakers included incentives for biofuels manufacturers, meatpackers, and young farmers, among others.

The governor vetoed the bill because the tax credits would have expired in two years. He wants a six-year extension.

In late 2020, Parson called lawmakers into special sessions twice — once to focus on crime prevention and then later to allocate federal COVID relief funds.

The crime special session in September 2020 fizzled after lawmakers adjourned without passing most of the governor’s priorities. Lawmakers approved the CARES Act funding two months later, but facing resistance, the governor had to abandon his proposal to shield businesses from certain COVID-related lawsuits.

Since then, Parson has been hesitant to convene special sessions, with the exception being last summer to renew a tax on hospitals that is crucial to fund Missouri’s Medicaid program.

Parson refused to call lawmakers back to Jefferson City to redraw the state’s congressional maps last year, a decision that ultimately exacerbated tensions in the Missouri Senate as GOP leadership and the conservative caucus clashed for months over what the redistricting plan should look like.

The lingering animosity in the Missouri Senate hangs over plans for a special session, even though the conservative caucus publicly announced Monday it was disbanding.

“I have yet to see a special session go smoothly since I’ve been in the Senate,” Rizzo said. “You’re also bringing people back that just went through a pretty contentious primary. I mean, it was pretty well open warfare for the soul of the Republican Party throughout the summer. And you’re going to bring people that already have issues to begin with back to pull in one direction? I’ll believe it when I see it.”