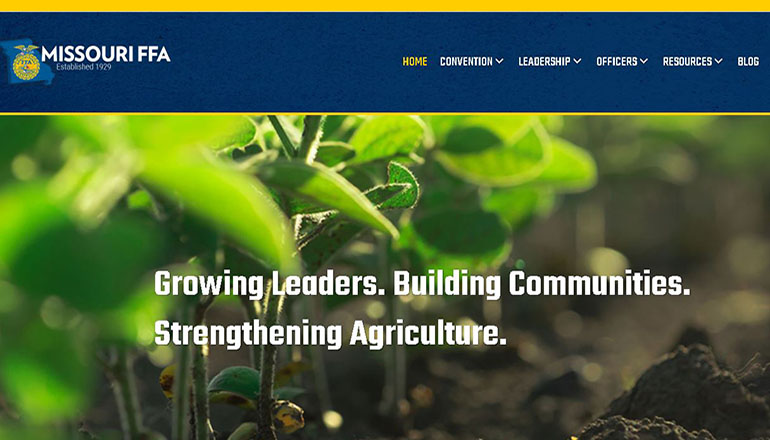 The Missouri FFA Association will honor fellow members for outstanding achievements April 30 – May 1 at the Mathewson Exhibition Center on the Missouri State Fairgrounds, Sedalia. Due to COVID-19-related health concerns, attendance at the 93rd Missouri FFA Convention will be by invitation only. Sessions will be live-streamed at THIS LINK. Convention results will be online at the Missouri FFA website. This year’s convention theme is Show-Me More.

Missouri FFA Executive Secretary Keith Dietzschold said, “Last year and this year, in order to be safe and responsible, convention format adjustments had to be made. Last year’s officer team missed out on the traditional convention experience. In an effort to provide the 2019-2020 state officers a moment on stage, the past officers will be sharing messages during this year’s sessions.”

Missouri FFA President Justin Eddy, Columbia FFA Chapter member, along with the other 15 state officers will conduct convention sessions. Earlier in April, the 686 delegates, two from each chapter, held the business session via survey. The results will be announced during the convention’s first session Friday at 9:30 a.m. Also during the first session, Missouri State Fair Director Mark Wolfe will welcome members and guests, and Missouri Department of Agriculture Director Chris Chinn will share remarks. Chapter Activity Awards and leadership development events results will be presented. LDEs and career development events were held prior to the convention.

During the Friday 1:30 p.m. session, the Missouri FFA will present 17 Honorary State FFA Degrees to adults and groups for their support of agricultural education and FFA. An additional 16 honorary degrees will be presented to parents of retiring state officers. CDE results will be announced and two Missouri FFA chapters will be chartered. The new chapters are Clearwater FFA Chapter, Clearwater, and Dixon FFA Chapter, Dixon. Missouri Department of Education Commissioner Margie Vandeven and National FFA Advisor James R. Woodard will address attendees.

During the third session Saturday at 9:30 a.m., 528 FFA members will be recognized with awards in 46 agricultural proficiency areas for the development of their supervised agricultural experience program. The proficiency areas are varied and include production, management, and communications disciplines. In Missouri, SAE programs during the 2019-20 school year generated more than $50 million in student income.

In the fourth session Saturday at 1:30 p.m., State Star Farmer, State Star in Agribusiness, State Star in Placement, and State Star in Agriscience will be named. The keynote address will be given by National FFA Central Region Vice President Paxton Dahmer, member of the Nevada FFA Chapter, Nevada. Dahmer is a third-generation FFA member and a past president of the Missouri FFA Association. He is a junior at the University of Missouri, Columbia, where he is studying agricultural education and leadership.

The Missouri FFA Association has 351 chapters and 25,662 members, ranking seventh as a state in membership. FFA strives to make a positive difference in the lives of students by developing their potential for premier leadership, personal growth, and career success through agricultural education.