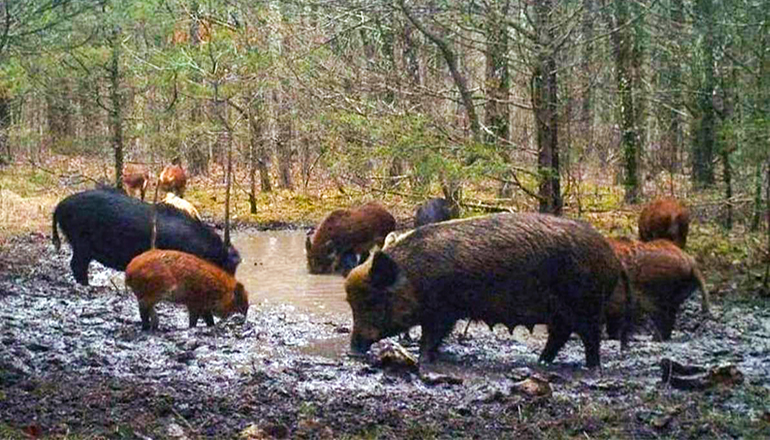 The Missouri Feral Hog Elimination Partnership (the Partnership) removed 9,857 feral hogs from the landscape in 2021, making the total number of feral hogs eliminated more than 54,000 since 2016. The Partnership is made up of 13 federal and state agencies along with numerous agriculture and conservations organizations.

“I’m really proud of the progress that the Partnership trappers have made,” said the Partnership Incident Commander Jason Jensen. “In 2021, we covered over double the number of acres and worked with double the number of landowners. Despite the increased effort and efficiency, the number of hogs removed was down by nearly 3,000 hogs. We anticipated we’d get to this point but not necessarily this quick. This is a positive indicator of the progress being made and a declining hog population. “

Partnership employees were able to assist 1,308 landowners and scout more than 3 million acres for feral hog damage last year. The top counties where feral hogs were removed include Iron County with 1,940 hogs, Wayne County with 1,329 hogs, and Reynolds with 1,268 hogs.

“I want to say a big thank you to all of the private landowners in Missouri that allowed Partnership staff to access their properties to remove feral hogs,” said Partnership Incident Commander Travis Guerrant. “Without private landowner’s continued support and cooperation, our progress toward elimination would be much more difficult.”

Feral hogs range spans across at least 35 states, including Missouri. Feral hogs are primarily found in the southern portion of the state and across at least 17 counties. Efforts made by the Partnership have resulted in a 48.5% decrease in the number of watersheds occupied by feral hogs in Missouri since 2016.

“Field reports from Partnership employees indicate feral hogs are becoming harder to find and that sounder sizes are decreasing, suggesting that elimination efforts are having a positive effect in reducing hog populations in the state,” Jensen said.