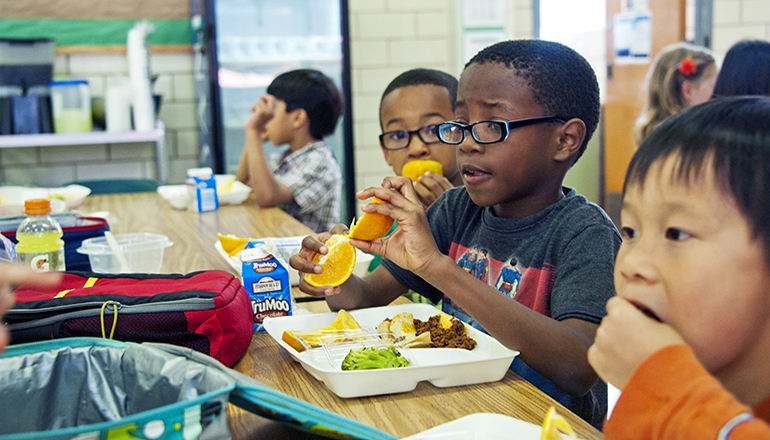 (Missouri Independent) – As food prices spiked over the summer and her children lost access to school-provided subsidized meals, Jennifer Sheils scrambled to feed her family.

Summers, without the free breakfasts and lunches four of her children qualify for at school, are often challenging — but this one was particularly so.

Inflated grocery prices magnified the stress of shopping on a limited budget, and stretched thin her family of seven’s then-$300 monthly federal food benefits, called SNAP, forcing them to devote a larger portion of their income to food. Sheils would opt to purchase peanut butter and cheese instead of meat; cereal instead of fruits and vegetables; Kool-Aid instead of milk.

She hoped a supplementary federal food benefit could ease the summer burden: A pandemic program that provides $391 in grocery benefits per eligible child to cover summer costs.

Missouri is one of just seven states that still hasn’t been approved by the federal government to administer emergency food benefits, called Pandemic EBT, to cover summer 2022.

The program provides grocery benefits to schoolchildren who qualify for free or reduced meals, and to children under age 6 who qualify for SNAP, short for Supplemental Nutrition Assistance Program. The benefits are retroactive for the summer, so states can still disperse them, and Missouri is working to do so.

According to state officials, the delay is due to the fact that their original proposal did not include a key category of recipients, children under age six, and so it was returned by the federal government for correction.

The state resubmitted its plan earlier this month with the added information, and is awaiting approval, said Mallory McGowin, spokeswoman for the Department of Elementary and Secondary Education, or DESE, the agency overseeing the program.

Once the state’s plan is approved, McGowin said benefits won’t be immediately dispersed, because the state will still need to collect data from schools about eligibility.

Families “should start receiving benefits by the end of 2022,” she added.

For some families, the delayed benefits were a missed opportunity for much-needed relief during the summer.

Sheils said her family only narrowly avoided having several utilities disconnected because in recent months they have had to divert money from bills to cover groceries. There has been a lack of communication from the state to those eligible, she said, causing her additional stress and fear that she will miss out on benefits.

“Can you please tell me when Summer P-EBT will be issued?” Sheils pleaded in an email to DESE last month. “We really need help. Your website is not very user-friendly…Four of my kids have approval for free lunch and we haven’t heard anything about when we can expect help.”

DESE responded: “The summer plan has not been approved at this time,” but provided no further timeline.

“We’re a family of seven, and it’s just really difficult,” Sheils said in an interview. “I don’t understand why they can’t make it more streamlined for the summer. If [the federal government] is saying they’re available, then why do we have to wait?”

Sheils, who lives with her family in St. Charles, is not alone in worrying about when she will receive the benefits.

Advocates from Legal Services of Eastern Missouri, which has a public benefits division, and Operation Food Search, which is a hunger relief advocacy group, both noted an influx in calls from people concerned about P-EBT in recent months.

Madison Eacret, coordinator of public policy at Operation Food Search, said families have been calling in part because many are accustomed to being “vigilant” in order to ensure the state provides their benefits, and they worry they may have missed their benefits because of the delay.

Last summer’s P-EBT required an application process, Eacret said, but this year’s does not — another source of confusion.

Jenna Howard, a single mother of three in Kansas City, has been frustrated by the delayed benefits. She said her family makes too much to qualify for SNAP, but her children qualify for subsidized school meals, making them eligible for P-EBT.

“I can’t sign up for regular food stamps as I am considered to make too much money,” Howard said, “but I am having to get a second job just to provide food for my kids.”

She has looked into the benefits but found it impossible to get a timeline from the state.

“We just keep getting told there is no time frame or timeline of when Missouri will get some kind of relief,” Howard said. “There just are no answers to any of our questions.”

McGowin said the state is finalizing a portal for schools to submit the names of eligible students, and “communication will be sent to schools and families prior to the launch of this portal.”

Missouri has pointed to administrative challenges in rolling out the benefits as the reason for delays.

DESE is leading the administration of the benefits while working with the Department of Social Services to process and distribute the benefits.

McGowin said the state’s first plan, submitted to the federal government in August, was denied because the state had not included an eligible group, children under age six. DESE does not have data for that age group, so the Department of Social Services, which does have the data, worked to “create a plan for children under 6 enrolled in child care.”

That revised plan was submitted on Oct. 5.

DSS “stepped in to help as soon as we were asked,” said Caitlin Whaley, the department’s spokeswoman.

She said P-EBT is “challenging” because of the “high degree of coordination needed between not only DSS and DESE but also individual school districts.” In addition, the federal rules have shifted each year of the pandemic.

McGowen said part of the challenge has been tech-related: DESE is in the “final stages of releasing a mechanism for schools to submit students eligible…using an online portal.”

Christine Woody, food security policy manager at the advocacy organization Empower Missouri, said that although the benefits were especially needed in the summer — when “you’re hungry, you need food right now” — “it will still help families” in Missouri to receive them in the next few months.

Some advocates are hopeful that once benefits are rolled out, it will be more straightforward this year than it was last year when DSS ran the program instead of DESE, and benefits required individuals to opt-in by submitting applications.

Sheils received 2021 summer benefits in February of this year, after months of following up with DSS.

Howard says she submitted an application but never received benefits for summer 2021. With three eligible children, at the rate of $375 per child last year, she missed out on $1,125 in food benefits.

According to data provided by DSS, only around 50% of the children predicted to be eligible actually received summer 2021 P-EBT benefits — roughly 220,000 of the 440,000 projected eligible children.

By comparison, Nebraska last year issued summer benefits at a rate of roughly 80% of the eligible population.

This year, benefits will be automatically applied to those eligible, and individuals will be mailed P-EBT cards if they did not already receive them previously. Participants will need to call DSS’s customer service line if they need a new card.

Though Missouri is one of just seven remaining states without federal approval, it is part of a national trend of delayed dispersal of P-EBT benefits. Some states, even upon approval, have taken months to disburse benefits.

There is not yet comprehensive data on when states began implementing summer benefits, once approved. By July, over half of all states had been approved, according to the advocacy group Food Research & Action Center. At that point, Missouri had not yet submitted its application.

States neighboring Missouri have all been approved, but vary in implementation.

“The fact that there are delays feels quite unnecessary given how much lead time states and USDA had to implement the program,” said Lauren Bauer, fellow at the nonpartisan think tank the Brookings Institution, who has studied P-EBT nationally.

A report Bauer co-authored about P-EBT in 2020, from the Hamilton Project of the Brookings Institute, found the program reduced food hardship in low-income families with kids.

Sheils, the mother of five, hopes the benefits arrive soon.

“It’s just really frustrating for a family with children because the summer’s gone by, and now everything is snowballing,” she said. “I could really use the food money for them.”

(Photo by CDC on Unsplash)

Clara Bates covers social services and poverty for The Missouri Independent. She previously worked for the Nevada Current, where she reported on labor violations in casinos, hurdles facing applicants for unemployment benefits, and lax oversight of the funeral industry. She also wrote about vocational education for Democracy Journal. Bates is a graduate of Harvard College.