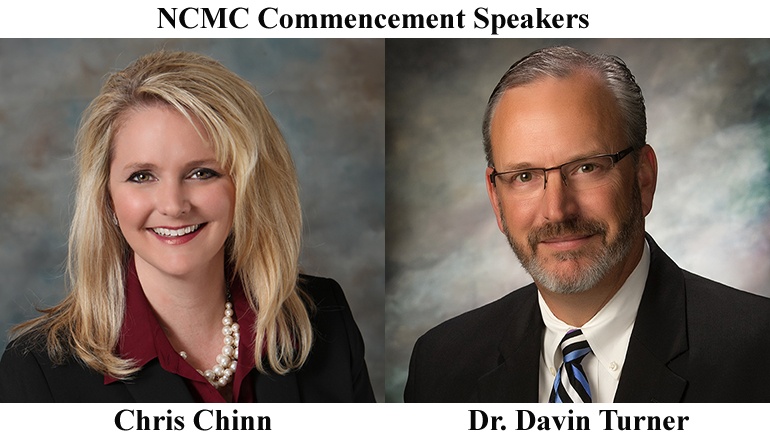 Missouri Director of Agriculture, Chris Chinn and Dr. Davin Turner, Chief Medical Officer and President of Mosaic Life Care Medical Center in St. Joseph will give the commencement addresses at North Central Missouri College in Trenton, Missouri on May 8, 2021. Director Chinn will speak at the 9:00 a.m. morning ceremony and Dr. Turner will be the 1:00 p.m. afternoon speaker. Both ceremonies will take place at the Ketcham Community Center on the NCMC campus near downtown Trenton.

Chris Chinn, a fifth-generation Missouri farmer from Clarence, was named Director of the Missouri Department of Agriculture in January 2017. Director Chinn has held leadership positions in agriculture on the local, state, and national level for more than 15 years, working to move the state’s agriculture industry forward.

As a trailblazer in ag advocacy, Chinn has established her brand through social media and public speaking. Her blog and Twitter audiences have attracted more than 10,000 faithful followers who have tuned in to hear her farm story. Through her outreach, she stands up for both rural and urban Missouri by bridging the gap between farmers and consumers and contributes to the advancement of the state’s No. 1 industry.

As the Director of Agriculture, Chinn created the MORE Strategic Initiative to protect and promote Missouri’s agriculture industry. The four pillars of the initiative are Feed MORE, Reach MORE, Connect MORE, and Empower MORE, tying in to the needs of farmers and consumers in our state. She also works closely with Governor Parson and fellow cabinet members. Together they have advanced the Governor’s workforce development and infrastructure priorities. These priorities help expand job opportunities in agriculture and repair roadways, bridges, and buildings.

In 2007, she served as chairman for the American Farm Bureau Young Farmers and Ranchers Committee and served on the board of directors for the American Farm Bureau Federation. In 2013, Chinn became a national spokesperson when she was named one of four Faces of Farming and Ranching by the U.S. Farmers and Ranchers Alliance, an honor that identifies farmers and ranchers that are eager to share their farm story. She has served as a board member for the Shelby County University of Missouri Extension Council and the Long Branch Area YMCA board of directors. Chris is a member of the Missouri Pork Association and served on the association’s state board since 2015. She is a member of ALOT (Agriculture Leaders of Tomorrow) Class 13, American Farm Bureau PAL (Partners in Agricultural Leadership) Class 5, and is a member of the Shelbina Christian Church.

Chinn resides on her family’s farm in Shelby County with her husband, Kevin, and her two children, Rachelle and Conner, where she helps manage their 1,600 sow farrow-to-finish hog operation, as well as their family feed mill. Chinn and her husband also have a small cow-calf herd, as well as raise corn, soybean, and hay.

Dr. Davin Turner is the Chief Medical Officer and President of Mosaic Life Care Medical Center St. Joseph and has worked for the organization for over 25 years. He began working part-time in the Clinic President role on January 1, 2012, moved to full-time Clinic President in October 2012. Mosaic Life Care Clinic is a multi-specialty practice consisting of over 205 physicians, 100 Advanced Practice Providers, and over 750 support staff in our 50 clinical locations in three states.

As the Clinic President, he worked in a dyad role with the Medical Center President. He was promoted to Chief Medical Officer in 2019 to continue the organization’s focus on clinical quality, safety and operational excellence across the system. He took the role of President Mosaic Life Care Medical Center St. Joseph in 2019.

North Central Missouri College is honored to have both guests as commencement speakers and appreciate their commitment to providing our graduates professional and thoughtful advice for their future endeavors.