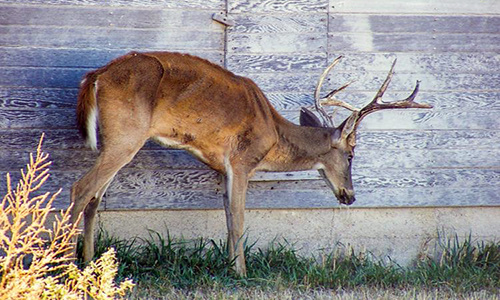 The Missouri Conservation Commission recently approved recommendations by the Missouri Department of Conservation (MDC) for its fall and winter efforts to find cases of chronic wasting disease and help limit the spread of the deadly deer disease to more deer and more areas.

Based on the findings from the past season, MDC has added seven new counties to its CWD Management Zone: Bollinger, Cape Girardeau, Grundy, Madison, McDonald, Mercer, and Perry.

MDC has increased the availability of antlerless permits in the seven new counties and expanded the firearms antlerless portion to help harvest more deer in the counties and limit the spread of the disease.

MDC has also removed the antler-point restriction for Grundy and Mercer counties, which are included in the Zone.

To help limit the possible spread of CWD, MDC encourages hunters to process deer as close as possible to where harvested and to properly dispose of carcass parts by leaving or burying parts on site, or bagging parts and placing them in trash containers.

According to the Wildlife Code of Missouri, the placement of grain, salt products, minerals, and other consumable natural and manufactured products used to attract deer is prohibited year-round within counties of the CWD Management Zone. Exceptions are feed placed within 100 feet of any residence or occupied building, feed placed in such a manner to reasonably exclude access by deer, and feed and minerals present solely as a result of normal agricultural or forest management, or crop and wildlife food production practices.

The feeding ban does not apply to food plots or other agricultural practices.

MDC will require hunters who harvest deer in 31 counties of its CWD Management Zone during the opening weekend of firearms deer season, Nov. 10 and 11, to present their deer – or the head with at least six inches of neck attached — for CWD sampling at one of 61 sampling stations throughout the counties.

The 31 counties include those where CWD has previously been detected, those within approximately five miles of positive, select counties along the Missouri-Arkansas border near where cases of CWD have been found in Arkansas, and the seven counties added to the CWD Management Zone.

MDC asks hunters to field dress and Telecheck their deer before taking them to a CWD sampling station. Hunters can get test results for their CWD-sampled deer online at mdc.mo.gov/CWDTestResults.

Get more information at mdc.mo.gov/cwd under “Mandatory Sampling,” and from MDC’s “2018 Fall Deer & Turkey Hunting Regulations and Information” booklet, available starting in July where permits are sold.

“MDC is trying to limit the spread of CWD in Missouri by finding cases and slowing the spread to more deer and more areas,” said MDC Cervid Program Supervisor Barbara Keller. “Mandatory sampling is a powerful surveillance tool we use to monitor the levels of CWD in areas known to have the disease, but more importantly, to detect any ‘sparks’ or new areas of infection so we can begin managing for the disease in those areas without delay. With 75 confirmed cases of CWD in wild deer since 2012, the disease is still relatively rare in the state and we want to keep it that way.”

MDC will again offer voluntary CWD sampling for deer harvested in any of the 48 counties of the CWD Management Zone during the entire deer season from Sept. 15 through Jan. 15, 2019. Get more information on MDC’s voluntary sampling efforts, including locations, later this summer at mdc.mo.gov/cwd under “Voluntary Sampling.”

MDC asks hunters to field dress and Telecheck their deer before taking them to a CWD sampling station. Hunters can get test results for their CWD-sampled deer online at mdc.mo.gov/CWDTestResults.

There have been no cases of CWD infecting people, but the Centers for Disease Control and Prevention (CDC) strongly recommends having deer tested for CWD if harvested in an area known to have cases of the disease. The CDC also recommends not eating meat from animals that test positive for CWD.

MDC will again contact landowners of five acres or more in areas very near to where multiple infected deer have been found to offer no-cost “CWD Management Seals” to further reduce deer numbers and help limit the spread of the disease.

MDC will again also work with landowners on a voluntary basis to harvest more deer in immediate areas where CWD has been found through post-season targeted culling. These efforts help limit the spread of the disease by removing more infected deer from the areas.

Growing deer numbers led MDC to allow unlimited archery antlerless permits in Butler, Iron, and Reynolds counties and to include Howell County in the antlerless portion of the fall firearms season.