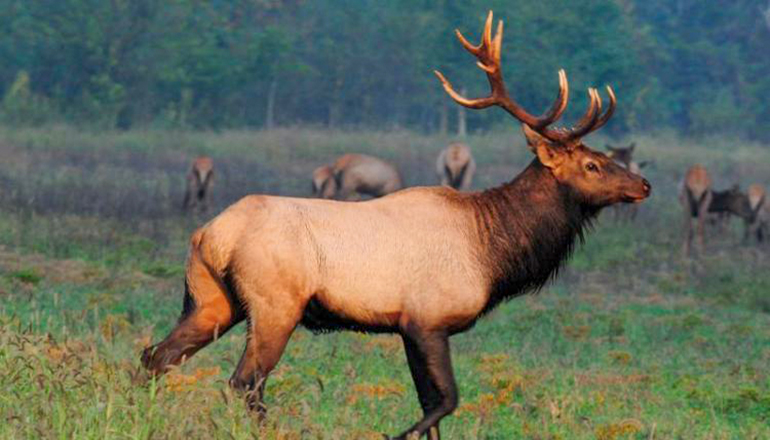 The Missouri Department of Conservation will offer five permits to hunt bull elk in Missouri this fall with at least one permit designated for qualifying area landowners and the remaining permits for the general public. MDC will also offer 400 permits for the taking of a maximum of 40 black bears during the second Missouri black-bear hunting season this fall. At least 10 percent of black bear permits will be allocated to qualifying area landowners. Only Missouri residents who will be at least 11 years of age by the first day of the hunt for which they are applying are eligible to apply for elk and bear permits during the application period of May 1-31. All permits will be assigned through a random drawing.

The Missouri Conservation Commission gave final approval to both elk and bear recommendations from MDC during its March 25 open meeting in Jefferson City.

MDC will require a $10 application fee for elk-permit applicants. Those selected will then be eligible to buy a permit at a cost of $50. All elk-hunting permits, including those allocated to approved area landowners, can be used in Carter, Reynolds, and Shannon counties, except the refuge portion of Peck Ranch Conservation Area.

The allowed hunting methods for each season portion will be the same as for deer hunting. The permits will allow for the harvest of one bull elk with at least one antler being six inches or greater in length.

For more information on elk and elk hunting in Missouri, visit this link.

MDC will offer 400 permits for the taking of a maximum of 40 black bears during the second Missouri black-bear hunting season running Oct. 17-26. There is a fee of $10 per applicant. Applicants must select one of three Black Bear Management Zones (BMZ). Those selected will then be eligible to buy a BMZ-specific permit at a cost of $25.

MDC has established three Bear Management Zones (BMZ) in southern Missouri and will issue annual permit numbers and harvest quotas for each of the three BMZs. Each permit will be for a specific BMZ and may be used on public or private property within the BMZ. Once the specific harvest quotas are filled for each BMZ, the season for that BMZ will be closed.

Permit and harvest quotas for the upcoming Oct. 17-26 bear season will be:

Hunting hours will be a half-hour before sunrise to a half-hour after sunset. Hunters must call MDC prior to hunting each day to determine the closure status of the BMZ for which they are permitted. Hunters will be allowed to use both archery and firearms equipment with allowable methods being the same as those for deer and elk, except the use of an atlatl. Baiting and the use of dogs will not be allowed.

The harvest limit will be one bear per permit. Only lone black bears may be taken. Hunters may not take bears that are known to be in the presence of others bears, including female black bears with cubs. Bears may not be disturbed, pushed, harassed, or taken from a den.

Learn more about black bears and bear hunting in Missouri at this link.