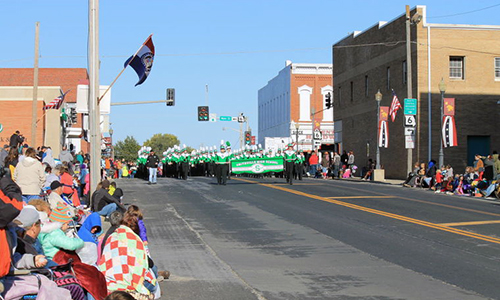 In just ten days, the Missouri Day Festival parade will roll on the streets of Trenton.

The parade on Saturday, October 15th begins at 8:30 from its usual starting point at Main and Crowder, proceeding to 9th Street. As in the past, bands marching in the parade are expected to exit at Normal Street and proceed to the high school for other competitions.

The parade is sponsored by the Trenton Rotary Club and features the theme “Spirit of America.”

Rotary Parade committee member Steve Taylor says entries are to use an online registration form which can be found by clicking HERE.

Entrants are to be notified about the middle of next week as to their placement in the October 15th parade.

There is a suggested donation of $20 for a non-political entry in the parade. Entries of a political nature, such as by a candidate, political party, or about a ballot issue, are still charged a fee of $25.

Proceeds are used by the Trenton Rotary Club which wants to apply for a matching grant from the Rotary Foundation to assist with costs of playground equipment for handicapped citizens.