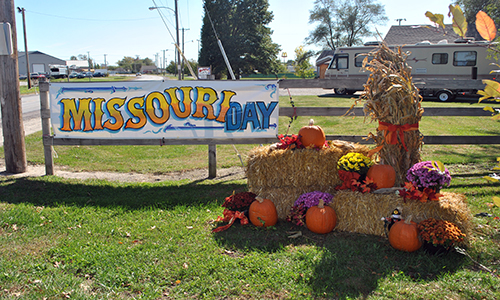 The Missouri Day Festival is chock full of activities again this year with fun the entire family can enjoy.

A soup supper at the First Baptist Church the evening of Thursday, October 13th will take place from 5 until 7 o’clock.

The supper will be followed that evening by the festival’s opening ceremonies at the First Baptist Church at 7 o’clock.

Activities on Friday, October 14th include vendors open for business from Noon until 8 o’clock, a quilt show at the old JC Penney store at Eastgate Shopping Center from 5 until 8 o’clock, a talent show at the pavilion at 5:30, atlatl throwing under the lights at Johnson Ballfield, and a country dance featuring Young Country from 7 until 10 o’clock at the North 65 Center with doors opening at 6 o’clock.

Saturday events on tap October 15th includes the annual parade on Main and 9th streets beginning at 8:30. Marching band competition at the high school gymnasium and C.F. Russell Stadium during the day and into the evening.

A shuttle service will be available at the First Baptist Church from 10 until 5 o’clock.