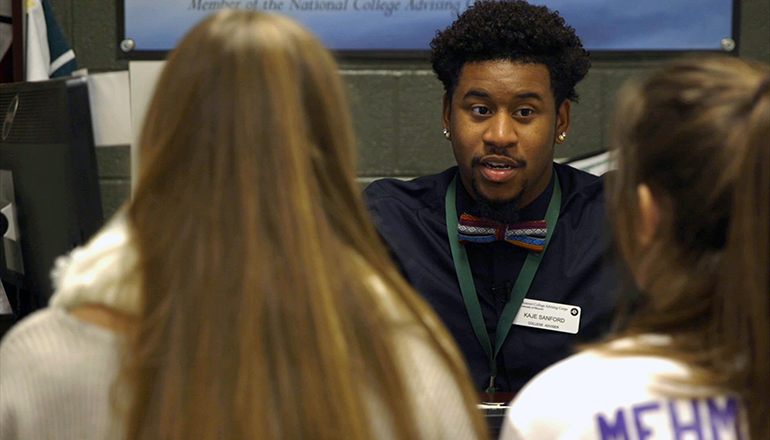 The Missouri College Advising Corps, headquartered at the University of Missouri, has helped more than 20,000 students enroll in college since 2008. As it begins its second decade, MCAC is poised to help even more students.

MCAC’s trained advisers, themselves recent college graduates, commit to two years of full-time, on-site service at one of 43 partner high schools throughout the state, said Jerron Johnson, director of the program. The corps targets high schools with high percentages of low-income, underrepresented and first-generation college students.

At a recent luncheon celebrating MCAC’s 10 years of operation, MU Executive Director of College Pathways Meredith Naughton announced that the corps will become part of MU Extension and Engagement this summer.

Since its launch a decade ago, MCAC has been part of MU’s Division of Enrollment Management. Both units work with high school students planning to attend college, but Naughton says MCAC’s mission isn’t to recruit for MU but to help students find and choose a “best fit” institution. Advisers organize campus tours at a variety of two- and four-year institutions across the state. In both one-on-one and group sessions, advisers also provide extensive guidance for students and their families as they plan, apply and seek financial aid for college.

“MCAC is a perfect example of engagement in action,” says Vice Chancellor for Extension and Engagement Marshall Stewart. “The corps places advisers in communities throughout the state so they can leverage university resources, research and knowledge to improve lives.”

Naughton says the move will allow the corps to take advantage of MU’s network of county extension centers and to collaborate with field faculty in specialties such as personal financial planning and youth development. MCAC will also be able to tap MU Extension’s in-house grant management resources, she says.

MCAC is one of the 10 founding member institutions in the National College Advising Corps, which today comprises 25 corps in 14 states. Advisers are AmeriCorps members who receive a modest stipend for their service. In addition to the experience they gain at their partner schools, advisers also participate in professional development opportunities as they plan their next steps after they leave the corps, Naughton says.

By helping more students realize their ambitions of attending and completing college, MCAC ultimately strengthens families and communities, particularly in schools that are trying to develop a stronger “college-going culture,” Naughton says. Most schools don’t have enough counselors on staff to provide the kind of in-depth assistance that the advisers provide, from guidance on applications and financial aid paperwork to scholarships and award letter comparisons.

MCAC will place advisers into five new partner schools in 2018-19 thanks to a three-year, $300,000 award from the Missouri Scholarship & Loan Foundation and support from RootED, a new initiative launching in the state through the National College Advising Corps to support college access for rural students.

Missouri Commissioner of Higher Education Zora Mulligan marked the occasion by presenting MCAC with a resolution from the state Coordinating Board for Higher Education. State Rep. Kip Kendrick acknowledged MCAC’S statewide impact over the past 10 years and shared a resolution co-sponsored by 20 members of the Missouri House of Representatives.

Commissioner Mulligan and MU Chancellor Alexander Cartwright both recalled how their lives had been changed by chance conversations with people about education and careers. Mulligan told the advisers that in their schools were students who, whether they know it or not, are “waiting for the conversation that transforms their vision of what’s possible.”