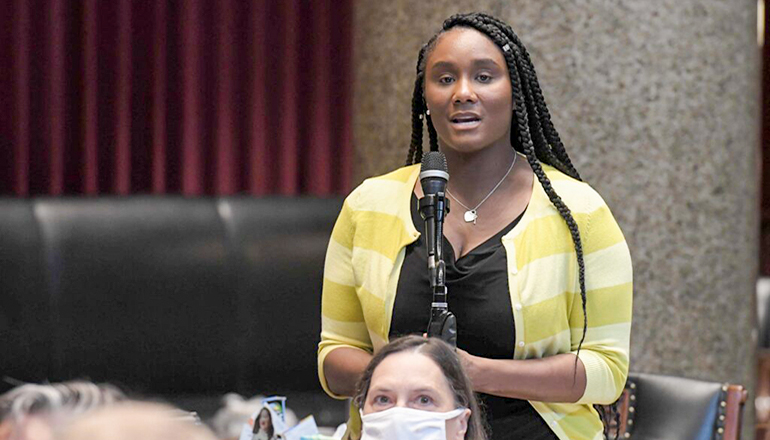 (Missouri Independent) – As a young girl, state Rep. Raychel Proudie remembers when the beads in her hair would clap together as she walked. Her teachers would call it a “distraction” — the same way they did when her hair was “too high.”

“You would come home and tell your mom, or she would get a note about this,” Proudie said, adding that the note would instruct her mom to change her hair.

“These are the same type of rules, if you will, that we still use,” said Proudie, D-Ferguson.

She also recalls the hurtful experience of being told by a high school dance coach to pull her “nappy” hair back.

For the second year, Proudie and Rep. Shamed Dogan, R-Ballwin, have introduced legislation that would create the CROWN Act, which stands for Creating a Respectful and Open World for Natural Hair.

It would prohibit discrimination based on hair texture and protective hairstyles in educational institutions that benefit from state financial assistance or state student financial aid.

The measure passed unanimously out of the Special House Committee on Urban Issues on Jan. 31, on the eve of Black History Month. It has since been approved by the House Rules Committee, making it eligible to be placed on the chamber’s debate calendar.

Dogan said the bill aims to address discrimination against common hairstyles in the Black community, such as braids, locks, afros, twists, and curls.

“This is a thing that does happen in our country,” Dogan said. “And some of the more outrageous examples of it… have been to African-American children in a school setting.”

Parents are looking for schools to create affirming environments, said Marjorie Dorimé-Williams of the Central Missouri chapter of Jack and Jill of America, a national family organization for Black mothers and children.

“When children are punished because of their hairstyles, it tells them that they are not accepted as they are,” Dorimé-Williams testified at a Jan. 24 legislative hearing on the bill.

Her daughter’s hair has nothing to do with her intelligence or her ability to perform in a classroom. However, research shows that Black girls disproportionately bear the brunt of hair discrimination.

“My little girl loves her afro,” Dorimé-Williams said. “She wants to wear it to school every single day. And so I hate to think about the fact that she would be judged unfairly because of the hairstyles that she chooses.”

A similar bill failed to gain much traction in the legislature last year, but Proudie said she believes the language in this year’s version is stronger.

Last year, a Jewish woman with very curly hair called Proudie to thank her for sponsoring the legislation. The woman told her a story about how she wasn’t allowed to dance in a public high school’s holiday performance unless she relaxed her hair. However, her curly hair was a point of pride of her great grandmother, who was a Holocaust survivor. She ultimately wasn’t able to participate.

Hearing the story and other input, Proudie felt it was best to use the term “immutable,” in regards to hairstyles instead of “race-based.”

“We recognize that things that are immutable are things that you cannot change,” Proudie said.

Cheryl Adelstein, deputy director of the Jewish Community Relations Council of St. Louis, said systemic racism in society overall has created a wealth and income gap, which can be closed in part through education.

“We want to make sure everyone is comfortable getting their education,” said Adelstein, during the Jan. 24 hearing. “And these bills will reduce discrimination in publicly-supported education institutions.”

Dogan spoke about a bi-racial high school wrestler in New Jersey named Andrew Johnson. In December 2018, a referee told Johnson 90 seconds before his match that he had to cut his dreadlocks or he wouldn’t be able to compete. He agreed to cut his hair there on the mat in front of the audience, and a viral video shows he was visibly distraught.

“The kind of emotional distress that created for that gentleman – as well as for any other kid watching – that was just horrible, horrible, horrific,” Dogan said. “It was simply because of the negative stereotypes that people associated with those hairstyles, labeling them unprofessional, quote-unquote.”

Fourteen other states have passed CROWN Acts, Dogan said, as well as several cities, including Kansas City and St. Louis.

As a former school counselor, Proudie believes the bill is part of being good stewards of tax dollars.

“You don’t get to tell children whose parents pay in taxes for this school to run, that the way in which the hair that grows out of their head is a distraction and penalize them for it,” Proudie said. “That is just ridiculous. That should be illegal and that’s what, in my opinion, this bill is seeking to do.”