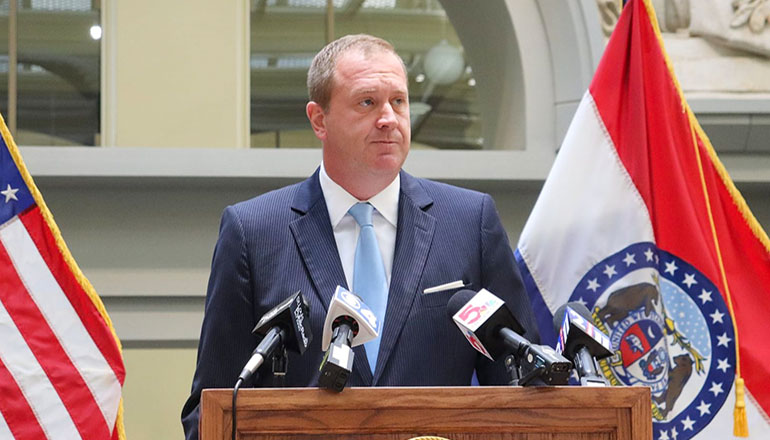 (Missouri Independent) – Missouri Attorney General Eric Schmitt’s office dismissed accusations that his office and the state department of health illegally concealed records and violated the Sunshine Law during the course of a medical marijuana lawsuit, calling the charges “frivolous” and “baseless.”

The accusation arose last week in a motion seeking sanctions against Schmitt’s office and the Missouri Department of Health and Senior Services. The motion was filed by the Callicoat family of Sarcoxie, Mo., who sued the state after being denied a license to grow medical marijuana.

The Callicoats argued that requested records were withheld by the department even though they were turned over to the legislature and to the media. They also noted that Randall Williams, director of the department of health, admitted using his private cell phone to text about public business without taking steps to save those records.

The records were withheld, the Callicoats argued, in order to undercut the lawsuit and prevent a thorough examination of the medical marijuana program.

In a 31-page response filed over the weekend, Schmitt’s office said the Callicoats’ motion “mischaracterizes the course of dealing between the parties, omits critical facts, and fails to raise any plausible basis for sanctions.”

The department’s document production, the attorney general’s office said, has been “ethical, comprehensive, and diligent.”

At the heart of the complaint is a request for records filed in May by a House Special Committee on Government Oversight that for most of the year has been investigating widespread reports of irregularities in how medical marijuana license applications were scored, as well as allegations that conflicts of interest within the program may have tainted the process.

On June 15, the department provided the House with roughly 37,000 records documenting interactions with industry insiders and detailing how key decisions were made.

Around the same time, the Callicoats were seeking documents from the department, arguing in their motion that it took until August to receive only 15,000 records. They only received the remaining 20,000 documents, the motion said, after filing a separate request to the Missouri House under the Sunshine Law.

The attorney general’s office said it was not involved in the department’s response to the Missouri House. It was only tasked with reviewing records requested as part of the litigation.

However, Schmitt’s office said, it should be no surprise that the dueling requests turned up different responses.

“There is of course overlap between the two requests,” the attorney general’s office said. “But, they are very different documents. It is misleading and incorrect to treat them as the same.”

As for Williams’ use of his private cell phone, the attorney general’s office said Williams testified that he “very infrequently” received text messages about public business. And he has subsequently clarified that the department of health’s general counsel searched his phone in June and found no responsive records.

The attorney general’s office dismisses accusations that its attempt to depose the plaintiffs while seeking to get the lawsuit dismissed was “abusive.”

“It is black-letter law that (the) defendant is entitled to depose plaintiffs prior to trial,” the attorney general’s office said.

In July, the attorney general’s office sought a protective order that would have prohibited the Callicoats or their attorneys from speaking about the case to anyone, including law enforcement.

It required the Callicoats’ attorney to join with the department of health and attorney general’s office to try to quash any subpoena sought by law enforcement, the motion says.

The Callicoats called this unusual, especially given reports over the summer of an ongoing FBI inquiry into the medical marijuana program and of a grand jury subpoena issued to the department of health for medical marijuana records.

The attorney general’s office said it is standard practice to enter into protective orders in cases where there is potentially privileged, confidential, or otherwise sensitive information.

In addition to laying out its argument against the Callicoats’ motion for sanctions, the attorney general’s office also accused the plaintiff’s attorney — Joe Bednar — of a “long and wearisome pattern of belligerent, abusive, and unprofessional tactics.”

Cole County Circuit Judge Patricia Joyce is scheduled to hear arguments on the motion on Tuesday, with the lawsuit scheduled for trial on Thursday.

If the Callicoats’ lawsuit is successful, it would lift the cap on the number of licenses the state can issue, allowing any applicant who met the minimum standards to be able to go into business.

While the legal dispute between the Callicoats and the state is set to play out in court, Missouri Democrats responded to the allegations by calling for the legislative oversight committee to restart its investigation into the medical marijuana program.

“This latest revelation is yet another reason why the House Special Committee on Government Oversight must resume its medical marijuana investigation and expand it to include a possible coverup and obstruction by the attorney general,” Quade said.

Schmitt, a Republican, is seeking a full four-year term as attorney general. He was appointed to the position after Josh Hawley resigned in 2019 to be sworn in as a U.S. Senator.

Nicole Galloway, a Democrat challenging Republican Gov. Mike Parson, repeated her criticism of the medical marijuana program’s rollout, calling it a “debacle” and accusing the administration of trying to “evade public scrutiny and cover up wrongdoing.”

The legislative oversight committee has yet to release a report on its investigation into medical marijuana. The St. Louis Post-Dispatch reported last month that the panel is unlikely to meet again until next year.

Jason Hancock has been writing about Missouri since 2011, most recently as lead political reporter for The Kansas City Star. He has spent nearly two decades covering politics and policy for news organizations across the Midwest and has a track record of exposing government wrongdoing and holding elected officials accountable. View all posts by Jason Hancock →