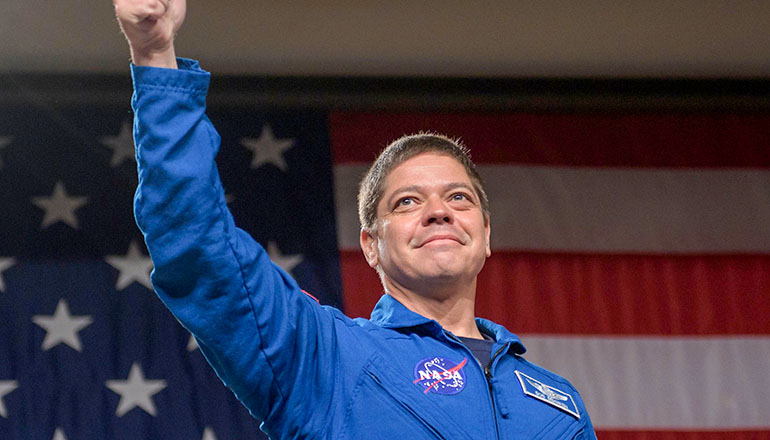 Later this month, north St. Louis County native Bob Behnken will put on his spacesuit and command the historic SpaceX flight to the International Space Station. He will strap into his seat in the cockpit of the Dragon spacecraft and fire up the vehicle. After a countdown concludes, Behnken and a small crew of NASA astronauts will lift off from the Kennedy Space Center in Cape Canaveral, Florida.

He will be aboard the first manned U.S. spaceflight in nearly a decade. The May 27 mission is also the first attempt by a private company – SpaceX – to fly astronauts to orbit.

Behnken, a Pattonville High and Washington University graduate, grew up being inspired by NASA’s programs. That inspiration has launched him into space two other times. He has logged more than 1,000 flight hours in 25 different aircraft.

“What’s really happened is the normal quarantine that astronauts go through about two weeks prior to launch to really make sure that we don’t take anything to the International Space Station or get the crew on orbit sick or be sick when we get on orbit. We’ve had to kind of stretch out and kind of begin closer to ten weeks prior,” says Behnken, a U.S. Air Force colonel.

He says the coronavirus will change the way the public gets to share the experience with the crew. For space shuttle launches, hundreds of thousands of people usually watch the launch at the Kennedy Space Center and nearby beaches. But the coronavirus outbreak has led NASA and SpaceX leaders to encourage the public to instead watch the liftoff on TV or online.

NASA is limiting the number of guests permitted at the space center, and the Kennedy Space Center Visitor Complex is not selling tickets for public viewing on NASA property. The visitor complex closed indefinitely in mid-March.

Behnken says this mission is the first one his son will get to watch him take part in. “He’s seen me do it in old videos but he hasn’t seen me do it for real,” he says. Behnken and his wife, K. Megan McArthur, are both astronauts.

“It’s been really interesting, I think for both my wife and I, to have gone through the process of seeing each other launch in space. That’s an aspect of our relationship I think that most couples can’t share,” he says. “Because I’ve seen her take that risk and had it be in front of her and I’ve done that to her.”

The length of the latest mission is unknown.