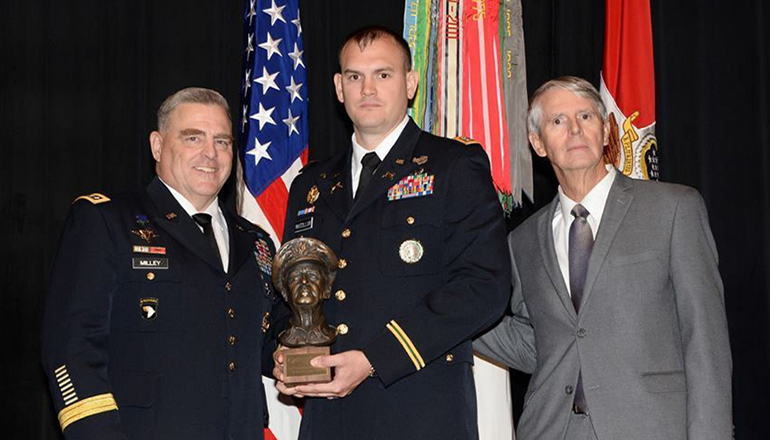 A Missouri Army National Guard officer recently received the General MacArthur Leadership Award during a ceremony at the Pentagon, in Washington.

Capt. Scott M. McCollum was one of six Army National Guard company grade officers in the country to receive the award, which is named after Gen. Douglas MacArthur. McCollum was the company commander of the 1137th Military Police Company and the Missouri Army National Guard’s recruiting officer strength manager. He now serves as the deputy to the director of the joint staff.

“We are very proud of Capt. McCollum and the standard he has set throughout his career as a Soldier and a leader,” said Brig. Gen. David L. Boyle, director of the joint staff. “Throughout his time in the Missouri National Guard, he has always achieved a level of excellence others seek to emulate, whether as a company commander, staff officer or noncommissioned officer.”

The purpose of the MacArthur award is to promote and sustain junior officer leadership, and is meant to recognize those who demonstrate the ideals Gen. MacArthur espoused – Duty, Honor, Country – during a famed speech at the U.S. Military Academy, in West Point, New York.

“Those three hallowed words reverently dictate what you ought to be, what you can be, what you will be,” MacArthur told cadets, in 1962. “They are your rallying points: to build courage when courage seems to fail; to regain faith when there seems to be little cause for faith; to create hope when hope becomes forlorn.”

McCollum was nominated for his leadership in multiple Army settings, including state emergency duty on behalf of the state of Missouri and abroad to support U.S. Army operations.

“He excels in austere environments and is skilled at making difficult decisions under severe time constraints,” according to his nomination package.

McCollum led a company of Soldiers to combat massive flooding along the Mississippi River in 2016 and oversaw the training of about 120 military police Soldiers who deployed to multiple training sites in Germany.

While McCollum was recognized for his efforts, he remained humble discussing the achievement.

“It’s an individual award, but required a team effort,” McCollum said. “This is an affirmation for my subordinates. I couldn’t have done it without their hard-work at the tactical level.”

The award was presented to McCollum by the Army chief of staff, Gen. Mark A. Milley, and Patrick Herman, of the General Douglas MacArthur Foundation, located in Norfolk, Va.

McCollum, who now lives in Columbia and grew up in Keytesville, enlisted in the Missouri Army National Guard in 2002. He said receiving the award is a great honor.

“Being here is a testament to the importance of mentorship,” McCollum said. “I’ve had leaders guide me along the way.”

He explained how being a prior-enlisted Soldier has helped shape him as a commissioned officer.

“I have a different level of empathy,” McCollum said. “I understand the ramifications of decisions at the lowest level.”

McCollum said he did not initially plan to pursue a career in the officer ranks but said the spark was lit by mentors who recognized his talent and ability to lead Soldiers.

“It was during my deployment to Kosovo,” McCollum said of deciding to pursue a commission. “Capt. Shane Spellman, a prior MacArthur winner, saw the potential in me to do something larger.”

McCollum said, then-Capt. Joy Grimes also had a large impact as his company commander at the time.

McCollum is a 2007 graduate of the University of Central Missouri, in Warrensburg, and completed a master’s degree in leadership from Lindenwood University, in St. Charles, in 2014. He is the son of Tony and Becky McCollum, of Keytesville. McCollum currently lives in Columbia with his wife, Logan, and three children, Rylie, Oden, and Rowan.

The Missouri National Guard is a force of 11,800 Citizen-Soldiers and Airmen who serve in more than 60 communities across the Show-Me State. For more information, please visit www.MoGuard.com.