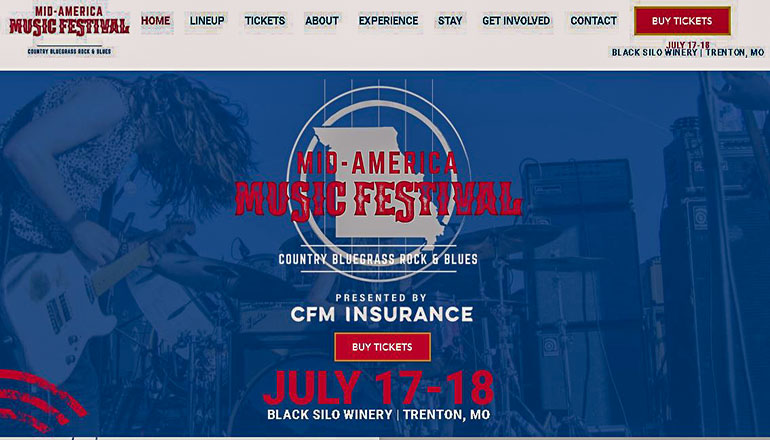 The line up has been announced for this year’s Mid-America Music Festival at Trenton.

Gates, food trucks, beverage stations, and merchants will open at the Black Silo Winery on the afternoon of July 17th at 3 o’clock for Rock and Roll Day. The Rock Battle of the Bands winner will play at 4:45, Autograph at 6 o’clock, Slaughter at 7:45, and Great White will perform at 9:45.

Gates, food trucks, beverage stations, and merchants will open July 18th at noon for Country Music Day. The Country Battle of the Bands winner will play at 1 o’clock, Bransen Ireland and Brian Rhea at 2:15, Dirt Road Anthem at 3:30, Travis Marvin at 4:45, an artist to be announced at 6 o’clock Morgan Evans at 7:45, and Granger Smith featuring Earl Dibbles Jr will perform at 9:45.

DJ Highnoone will provide entertainment between each set Friday and Saturday. A single-day pass for July 17th or 18th will cost $49, a two-day general admission pass will cost $75, and VIP perks start at $600.

Six rock and four country bands will compete in Battle of the Bands presented by American Family Insurance –Cara McClellan Agency for a chance to win $1,000 and open for the line up on their respective day.

Doors will open at the Black Silo Winery the afternoons of April 24th and 25th, and bands will start at 5 o’clock each evening. Unwritten Rulz, S. O. B, I the Storm, 90 Days Band, Monday’s Child, and Bootcut will play the April 24th. Amarugia Ridge Runners, Preston Ary Band, Steven Bankey, and the Flatlanders, and Crystal O’Conner and the Whiskey Rebels will perform April 25th.

The band who receives the most votes each night will win. There is a $10.00 cover charge for each battle, or a two-day ticket will cost $15.

More information on the festival July 17th and 18th and the Battle of the Bands April 24th and 25th can be found on the Mid-America Music Festival website or the festival’s Facebook page.