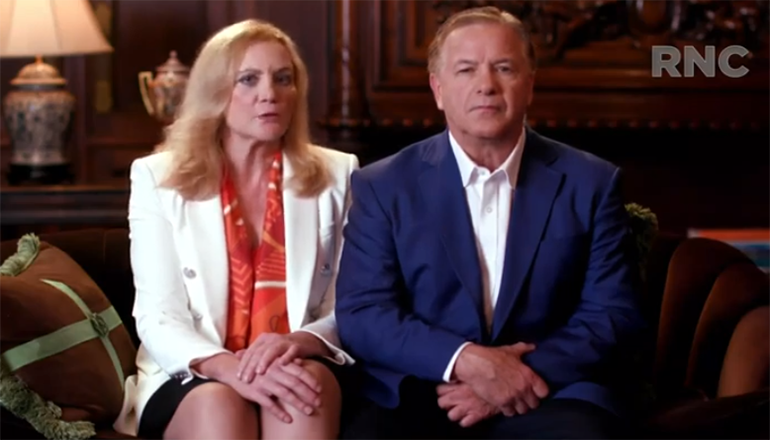 A St. Louis couple who pulled their guns on protesters walking along their private street in June were featured last night during the Republican National Convention. Mark and Patricia McCloskey, both personal injury lawyers, called the protesters “an out-of-control mob causing chaos in the streets.” Patricia McCloskey says “your family will not be safe in the Radical Democrats’ America.

“They are not satisfied with spreading the chaos and violence into our communities, they want to abolish the suburbs all-together by ending single-family zoning,” says Patricia McCloskey. “This forced rezoning would bring crime, lawlessness, and low-quality apartments into thriving suburban neighborhoods. President Trump smartly ended this government overreach, but Joe Biden wants to bring it back. These are the policies that are coming to a neighborhood near you.”

The McCloskeys suggested they are the victims for getting charged with felonies after using guns to defend their property. In July, St. Louis Circuit Attorney Kim Gardner’s Office charged the couple with one felony count each of unlawful use of a weapon — exhibiting.

“It is illegal to wave weapons in a threatening manner at those participating in nonviolent protest, and while we are fortunate this situation did not escalate into deadly force, this type of conduct is unacceptable in St. Louis,” Gardner said.

Gov. Mike Parson, Missouri Attorney General Eric Schmitt, and U.S. Sen. Josh Hawley have all come to the defense of the McCloskeys. Parson says President Donald Trump and U.S. Attorney General William Barr are reviewing the event. The governor suggested Gardner should be removed from office.

Mark McCloskey called out one of the protesters, Democratic Congressional candidate Cori Bush.

“The Marxist liberal activist leading the mob to our neighborhood stood outside of our home with a bullhorn screaming, “You can’t stop the revolution,” says McCloskey. “Just weeks later, that same Marxist activist won the Democrat nomination to hold a seat in the U.S. House of Representatives. In the city of St. Louis, that’s the same as winning the General Election. That Marxist revolutionary is going to be the next Congresswoman from the first district of Missouri. These radicals are not content with marching in the streets. They want to walk the halls of Congress. They want to take over.”

Bush is poised to be the first African-American Missouri woman to serve in the U.S. House.