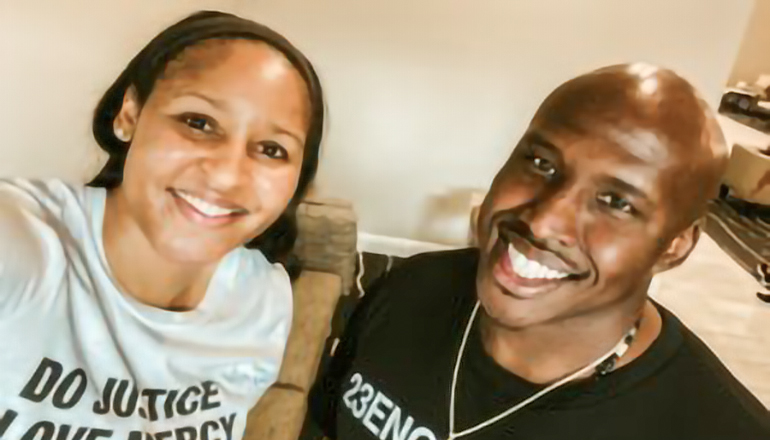 In July, the day Jonathan Irons had been waiting for finally arrived. He walked out of the Jefferson City Correctional Center as a free man. Waiting for him was a team of supporters, including the woman he now calls his wife.

WNBA star Maya Moore and Irons announced Wednesday that they tied the knot. Moore, 31, grew up in central Missouri’s Jefferson City. Irons, 40, is from the St. Louis suburb of Wentzville.

The newlyweds revealed their news to Robin Roberts on “Good Morning America”.

“We wanted to announce today that we are super-excited to continue the work that we’ve been doing together, but doing it as a married couple,” Moore said. “We got married a couple of months ago and we’re excited to just continue this new chapter of life together.”

Moore and Irons became friends many years ago through her family.

“Over the last 13 years we … just entered into this huge battle to get him home, and just over time it was pretty clear what the Lord was doing in our hearts, and now we’re sitting here today, starting a whole new chapter together,” she said.

Moore walked away from the game about two years ago to put the full courtroom press on to get Irons released. She was in the prime of her career playing for the Minnesota Lynx.

Irons had been locked up for more than 20 years for a violent O’Fallon home burglary that he maintains he did not commit. His attorneys, a team from the powerful law firm of Rosenblum Schwartz & Fry in St. Louis, argued there was no physical evidence linking Irons to the crime and other misconduct occurred by the police investigator in the case. Their work paid off – his conviction was overturned in March.

Irons said he asked Moore to marry him a few years ago, but told her to hold off on answering until he was free.

“Because in my mind, I didn’t know if I’d be home,” he said. “And she’s such an amazing, beautiful person, I could never trap her or not let her fulfill her dreams of being a wife and being a mother one day.”

Hours after his release from the maximum-security prison on “No More Victims Road”, Irons popped the question – again. Moore quickly accepted.

Moore is a two-time Olympic gold medalist, two-time NCAA champion, and four-time WNBA titlist. She was WNBA Rookie of the Year in 2011 and league MVP in 2014.

As for her basketball career, she says she does not have a game plan for that yet.

“I’m hoping sometime in the spring we’ll be able to have a next step moving forward, but right now I am trying to really just breathe from this long, long battle, and enjoy and rest,” she said. “There’s a lot of unknowns for a lot of us right now, so I’m still in that camp.”

Moore has told reporters in earlier interviews that a documentary is in the works to show their pursuit of shining a light on wrongful convictions.