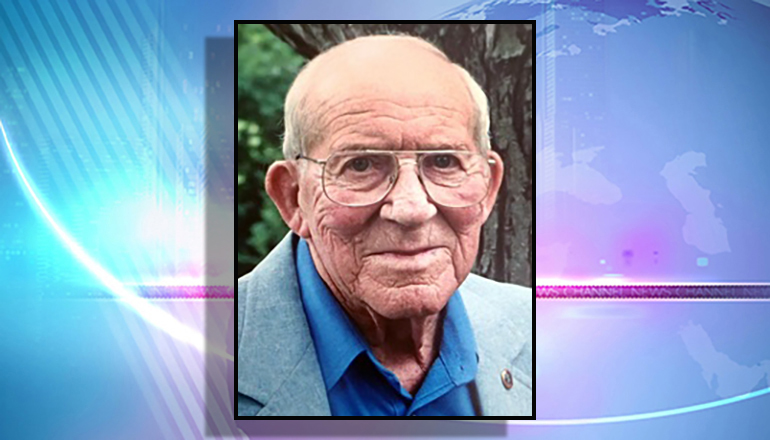 Mr. Brown, Tom to his family and many friends, was born Aug. 9, 1924, on his parents’ farmstead just north of Melbourne in Harrison County, the son of Thomas Armfield Brown, a state legislator, and Dora M. Brown, homemaker.

In addition to his parents, he was preceded in death by his son Thomas Alden Brown, five sisters, including Emma Ruth Brown and Eva Jane Maxwell, and one brother.

Survivors include his wife, Sarah Joe Brown, nee Alden, of the home; a son, Anthony J. Brown (Venus), of Maryville; and a niece, Marsha Jane Maxwell of Marshall.

Mr. Brown, in his own words, lived an “idyllic life” as a boy, when his days were filled with hunting, trapping, fishing, working cattle, raising pigs and horseback riding. He was a good athlete and played basketball for Gilman High School, where he graduated in 1942, shortly before enlisting in the U.S. Marine Corps after the United States entered World War II.

As a Marine, Mr. Brown perfected his already considerable marksmanship skills and qualified as a high-speed code operator. His subsequent service with the storied 6th Marine Division, which battled the Imperial Japanese Army in the Pacific Theater, was — there is no other word — heroic.

A member of a combat communications squad, Mr. Brown took part in the invasions of Kwajalein and Eniwetok in the Marshall Islands and also saw action on Guadalcanal and Guam. Near the end of the war he braved horrific fighting — sometimes hand-to-hand — during the epic struggle for Okinawa, one of the war’s bloodiest battles.

Immediately following the war, Mr. Brown was sent by the Marines to Tsingtao, China, where he participated in the formal surrender of a major Japanese army.  By war’s end, Mr. Brown, now a corporal, had received four battle stars as well as unit citations issued by President Franklin D. Roosevelt and the secretary of the Navy.

After gaining his honorable discharge, Mr. Brown returned to north Missouri, where he worked briefly in a milk plant and as a reporter for a newspaper in Chillicothe. Following his marriage to Sarah, he studied social science, history, and journalism at what is now Truman State University in Kirksville, earning a bachelor’s degree in 1949 and a master’s degree in political science in 1962.

Mr. Brown began his education career in Fayette before being hired to teach history at Trenton High School. A few years later he was named an instructor of history and political science at Trenton Junior College, since retitled North Central Missouri College.

During his years with the college, which lasted until his retirement, Mr. Brown, widely acknowledged by peers and students alike as a master teacher, completed a graduate studies program in African-American history at Johns Hopkins University in Baltimore, Md., and served briefly on the staff of U.S. Congressman Jerry Litton in Washington, D.C.

A prolific writer, he authored or co-authored three books: “A Grundy County Pictorial History”; “Better Than They Knew,” a history of North Central Missouri College; and “Me ’n’ Joe,” a slightly fictionalized memoir of his wartime experiences.

Out of uniform, and having learned how to play the guitar and piano as a youth, Mr. Brown became an enthusiastic amateur folk musician and performer who was noted for presenting songs and stories related to Missouri River steamboats and north Missouri coal mines.

Beyond his professional, scholarly and musical pursuits, Mr. Brown was active in civic affairs, serving three terms on the Trenton City Council. On other fronts, in the 1960s, he was an assistant Scoutmaster for Trenton’s Troop 99 of the Boy Scouts of America and tapped for membership in Mic-O-Say, the honor camping Society of the BSA’s Pony Express Council.

Central to his life from boyhood was a deep Christian faith expressed by decades-long service as an ordained deacon for Melbourne Baptist Church. A Sunday school teacher for many years, Mr. Brown was a popular lay preacher who was often invited to fill pulpits or perform sacred music both at Melbourne and other Southern Baptist churches across northern Missouri.

Throughout a long, busy and useful life, however, Mr. Brown’s signal accomplishment was probably his devotion and commitment to people coping with cognitive and developmental disabilities, work that proceeded from his determination to provide an exceptional quality of life for his eldest son, Thomas Alden Brown, who was afflicted with Down syndrome.

Both Tom and Sarah were leading activists on behalf of the mentally retarded at the state and national levels, and Mr. Brown played a key role in crafting Senate Bill 40, legislation that created local property taxes, revenue from which is used to maintain group homes, sheltered workshops and other programs and services.

Additionally Mr. Brown was a longtime member of the state Protective and Advocacy Council for the Developmentally Disabled and three-time president of the Higginsville State School and Hospital Parents’ Association, which he molded into a politically powerful lobby on behalf of those who, in his own often-repeated words, “cannot speak for themselves.”

During this time, Mr. Brown led the Retardation Association of Missouri, where he was a tireless champion of those living in institutions and group homes.  His efforts on behalf of developmentally challenged Missourians ultimately led to his appointment to the Missouri Mental Health Commission by Gov. Christopher Bond.

Throughout these years of activism, which spanned five decades from the 1950s to the 1990s, Mr. Brown liked to counter politicians and bureaucrats opposed to increased funding and higher levels of service for the developmentally disabled with what became his personal battle cry for kindness, compassion, and common-sense care: “Happiness first. All else follows.”

Funeral services are scheduled for 2 p.m., Wednesday, Dec. 5, 2018, at the First Baptist Church in Trenton. The body will be cremated following the service with future inurnment at Resthaven Memorial Gardens of Trenton. Open visitation will begin Tuesday at Whitaker Eads Funeral Home, also in Trenton.

Memorial donations are suggested to either the Grundy County Learning Center or the Sarah Joe Brown and Thomas V. Brown Scholarship at North Central Missouri College and may be left with or mailed to the funeral home.