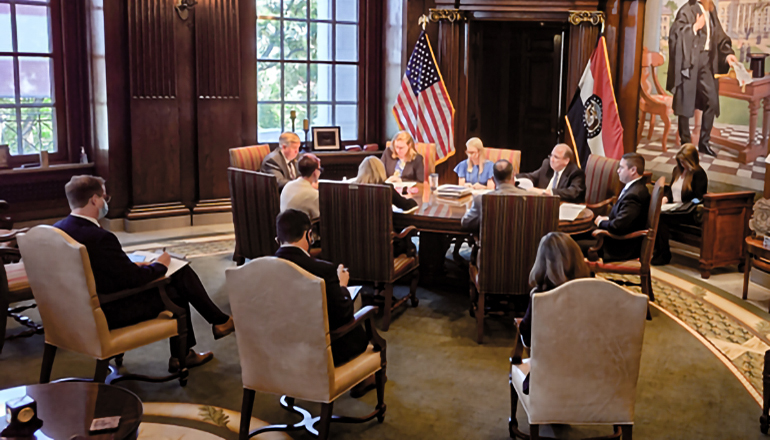 (Missouri Independent) – When news broke that an LGBTQ history exhibit was suddenly and without warning removed from the Missouri Capitol, Gov. Mike Parson contended the reason was that it didn’t get pre-approval from a board he chairs, but at that board’s first meeting in more than a year on Monday, neither the exhibit nor the state Capitol museum was discussed.

The Board of Public Buildings — made up of Parson, Lt. Gov. Mike Kehoe, and Attorney General Eric Schmitt — met in the governor’s office Monday afternoon for less than five minutes to discuss and approve bonds and an easement.

A review of more than five years of previous public meeting minutes shows no evidence the board has ever discussed museum exhibits, and the museum’s former director said in his 24 years on the job he never had to seek board approval for exhibits.  The pattern continued Monday, as the board adjourned without any mention of the exhibit.

Parson declined to take reporters’ questions afterward, and Schmitt participated in the meeting by phone.

Kehoe, who was appointed lieutenant governor by Parson in 2018, said in an interview he’s trying to figure out if the board has ever played a role in museum exhibits.  “I’m not saying it never happened,” he said,  “because I don’t know.”  He declined to say how he would have voted if the exhibit had come before the board, but added that “some parts of our history are uncomfortable to different groups of people for different reasons, but it is history.”

Parson said at the time of the removal that he only became aware of the exhibit after his office fielded complaints.

A records request by The Independent shows two Republican lawmakers — Reps. Ann Kelley of Lamar and Patricia Pike of Adrian — contacted the governor’s office through email to complain about the exhibit.

“Will you make the Governor aware of the gay rights exhibit that is in our Capitol building museum,” Kelley wrote in a Sept. 1 email to one of Parson’s staff. “In my opinion, I do not think it is appropriate for our school groups to see or for it to be displayed during the inauguration of a Republican Governor or at any time when the branches (are) controlled by a Republican majority.”

Pike sent pictures of the exhibit to a Parson staff member the following day, writing that “I believe that in our bicentennial year, for the many guests in the Capitol coming to our bicentennial ball, for the school children touring our Capitol building, that our Missouri Parks can find more appropriate displays to be featured at the State Museum during this high profile time at the Capitol.”

The day after the exhibit was removed, Connie Patterson, a spokeswoman for the Department of Natural Resources, sent a text message to Kelli Jones, the governor’s spokeswoman, to make her aware “of our moving gay rights exhibit from Capitol late yesterday.”

Patterson said the department notified the governor’s policy director, Kayla Hahn before the exhibit was removed.

“Getting media interest today,” Patterson texted. “Working with our legal on a statement.”

Jones replied: “Thanks for the heads up.”

With criticism mounting, the Parson administration announced shortly after the exhibit’s removal that it was being relocated down the street to a different building.

The exhibit was on display for only four days before it was taken down, even though it had been scheduled to remain until Dec. 26.

Called “Making History: Kansas City and the Rise of Gay Rights,” the exhibit documented the early days of LGBTQ activism in the state. It consisted of banners, curated by University of Missouri-Kansas City history students, recounting the activism of the city’s LGBTQ community.