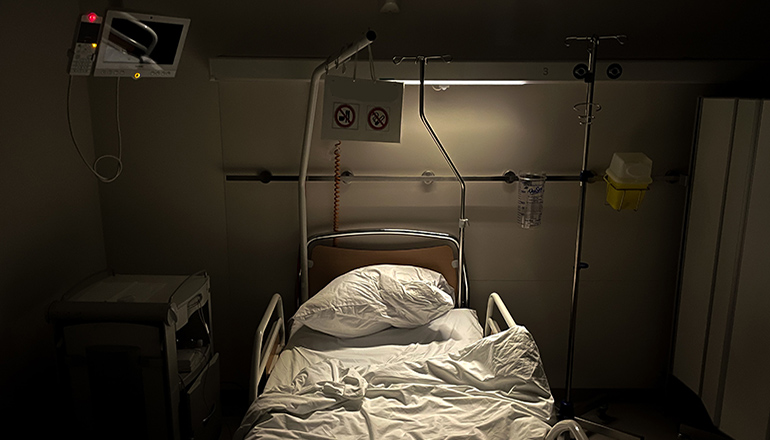 In March 2020, his 89-year-old mother had to go to the hospital after suffering from a fall. Lewis’ sister was their mother’s primary caregiver, but in the pandemic’s first days as hospitals restricted visitors, family members weren’t allowed to stay with her.

Lewis and his family were told their mother was doing fine, but then received an urgent call from the hospital saying she was dying. The hospital said they could see her if they arrived within three hours, Lewis said.

“I was able to get there and say goodbye to my mom. And all that she could say was, ‘Help me,’” Lewis said. “And this is what I’m here for, is to help someone else whose mom would be found in the same situation.”

Lawmakers hope to give families more opportunities to be there to support their loved ones under a bill heard Wednesday that aims to prevent the type of visitor restrictions hospitals, nursing homes, and healthcare facilities imposed during the COVID-19 pandemic.

Dubbed the “No Patient Left Alone Act,” the bill would allow patients to have a spouse or legal guardian and at least one of three “essential support persons” to be present in a hospital or healthcare facility.

While the bill stipulates healthcare facilities can still limit things like visitors’ movements and the number of visitors per patient at a time, they cannot require patients to be vaccinated against any disease to receive treatment or visitors.

“There should be someone to advocate for you at all times,” said Lewis, R-​​Moberly. “When you are at your most desperate, most vulnerable, you should not be left alone.”

The bill is a priority for House Majority Floor Leader Dean Plocher, R-St. Louis, who joined the bill sponsors in a press conference on the issue earlier this year. A handful of other states, like Arkansas and Oklahoma, have already enacted similar laws.

The four representatives who combined their bills into one piece of legislation stressed Wednesday that they have tried to work with healthcare providers to find a middle ground.

“I’m a businessman of my own,” said Rep. Mitch Boggs, R-LaRussell. “I don’t want to walk into anyone’s business and tell them how to do business.”

But healthcare organizations and nursing home advocates warned Wednesday in a Senate Committee on Seniors, Families, Veterans & Military Affairs hearing that the legislation could hinder healthcare providers in the future.

“It was a horrible situation to be put in,” said Nikki Strong, the executive director of the Missouri Health Care Association, a trade group that represents long-term care facilities. “I hope we’re never put in that again. But if we are put in that position, again, we have to be prepared to be able to comply.”

President Joe Biden’s administration has mandated that nursing home staff and healthcare workers at facilities that receive funding through Medicare and Medicaid be fully vaccinated or face repercussions, like fines.

Jorgen Schlemeier, a lobbyist who testified in opposition to the bill on behalf of the Missouri Assisted Living Association and Missouri College of Emergency Physicians, said facilities don’t want to be caught between conflicting state and federal requirements.

“Facilities cannot referee a fight between the state government and the federal government,” Schlemeier said.

“It’s going to stop the hospitals from doing what they need to do to fulfill their mission,” Schupp said, “which is to keep our patients safe and as healthy as possible and to make sure that we have people in place to take care of those patients.”

Michael Meyer, a Jefferson City resident who testified in support of the bill Wednesday, said his 88-year-old mother who is nearly blind and has limited mobility was admitted to the hospital in late December 2020 with severe abdominal pain. It was there Meyer said his mother faced a lack of care while no visits were allowed.

“She had to go to the bathroom. She soiled her sheets because she could not hold it while waiting for the nurse. They brought broth in for her to eat, but they just put it on a table in front of her and left and she couldn’t get up to eat it. She couldn’t see it.

“She literally told me she thought she was being left to die,” Meyer said.

After repeated attempts, Meyer said his family was finally granted an exception to see her, after which her condition improved.

“The no visitor policy is extremely flawed, discriminatory, and arbitrary,” Meyer said.

Nicole Lynch, a public policy and advocacy manager for VOYCE, a St. Louis nonprofit that advocates for quality living across long-term care, said what occurred during the pandemic was “completely unacceptable.”

“We had calls from residents and families that didn’t even know if their loved ones were alive during the height of the pandemic,” Lynch said. “They could not get a hold of the facility. They had no idea what was going on.”

While Lynch said VOYCE is in support of the underlying intent of the bill, she urged lawmakers to remove long-term care facilities from its language and instead pointed to a Senate bill sponsored by Sen. Bill White, R-Joplin, that also addresses when caregivers can visit residents during a state of emergency.

(Photo by Frederic Köberl on Unsplash)