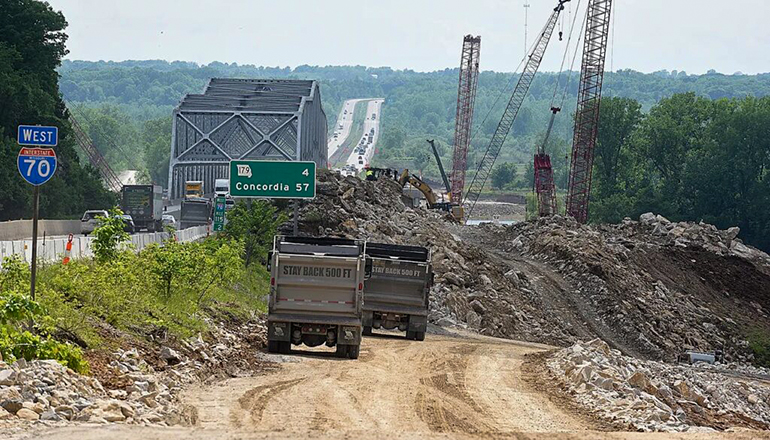 And almost as long, the Missouri Department of Transportation has warned that the road, one of the first interstate highways to be built in the 1950s, needs major reconstruction.

Funding for the biggest project of all – widening the interstate to three or four lanes in each direction – has eluded planners. But with the state enjoying an unprecedented surplus in excess of $6 billion, now is the time to make the wish for money a reality, said state Sen. Bill Eigel, R-Weldon Spring.

As one of his first bills filed in advance of the legislative session that begins Jan. 4, Eigel is proposing lawmakers dedicate a portion of the surplus to widen the highway to four lanes from St. Louis to Kansas City.

“I don’t think it is necessarily a great thing for cash to be sitting in the government’s bank account,” Eigel said. “We need to invest those funds in actual big infrastructure projects like I-70.”

Under his proposal, any general revenue funds in excess of a $4 billion cash balance would be transferred to the project fund. And from ongoing revenue, Eigel would dedicate about 2% annually – nearly $300 million this year – for 10 years.

That could generate up to $9 billion for the project, he said.

“That is a sufficient amount of funds based on the latest word I have from MODOT on the cost to rebuild I-70,” Eigel said.

No one is sure how much it would cost to widen I-70, said Patrick McKenna, MODOT’s current director. The department produced an estimate this summer that it would cost $2.75 billion to add a third lane in each direction, mainly by construction within the current right-of-way.

“I would say I don’t have any good estimates of what the 4-lane approach would be,” McKenna said.

The difficulties of estimating the cost mainly involve the acquisition of the additional right-of-way, property that in many places is developed for businesses serving highway traffic, he said. Many of the exit interchanges would have to be rebuilt as well.

“That is really where the price tag goes substantially higher,” McKenna said.

There are $256 million in awarded projects – most of it the $240 million being spent to build new bridges over the Missouri River connecting Boone and Cooper counties – and $236 million in planned projects.

Each of those is being built to accommodate three lanes of traffic in each direction, McKenna noted.

The difficulty of paying for a project like I-70 is that the state has already committed the federal highway funding it expects for the next five years and the cost would have to be borne entirely by state taxpayers.

But if lawmakers authorize the project, he said, MODOT will be ready to build it.

“I think it is great there are some creative ideas coming along,” McKenna said.

Eigel’s proposal, or any other that provides funds for I-70, will be welcome, said Jeff Glenn of Cape Girardeau, executive director of Missourians for Transportation Investment.

“I-70 is an economic engine for the state of Missouri and everyone knows it’s a problem,” Glenn said. “I-70 is certainly among our highest priorities as an organization.”

There hasn’t been any time in the past 20 years when it was possible to think about multibillion-dollar infrastructure projects, Glenn said.

“There is no better time for us to look at a big project like this than when we have record state surpluses,” he said.

Eigel, who is considering whether to run for governor in 2024, said his proposal isn’t tied to that effort but it is the kind of big-idea project a governor should be presenting.

“I want to propose and move legislation to have an impact on the lives of Missouri citizens,” he said.

Eigel’s bill was one of hundreds filed Thursday, the first day for pre-filing bills for the upcoming session. Filing early doesn’t guarantee early action but it can spark debate.

By 5 p.m., there were 343 bills filed in the House proposing statutory changes and 23 proposing changes in the Missouri Constitution. The number in the Senate, which must sort proposals by seniority of members before numbering them and posting them online, was unknown at that time.

There are House bills to provide property tax cuts for senior citizens and veterans, rework how child custody is awarded in divorce cases, and make it harder to sell stolen catalytic converters.

There are six proposals filed so far in the House for changing the process of amending the state constitution and Sen. Andrew Koenig, R-Manchester, said he will be pushing a bill for changes in the Senate.

His proposal, he said, would lower the percentage of voters that must sign a petition proposing a constitutional amendment, but raise the majority needed for approval.

Of 89 initiative proposals submitted as proposals for the 2022 ballot, only two gathered enough signatures to submit for verification, and only one, Amendment 3 to legalize recreational marijuana, made it to the ballot.

“I want to make it easier to get on the ballot but harder to pass,” Koenig said.

Koenig said his idea is similar to a House proposal from this year’s session that would require enough votes to equal a majority of registered voters, rather than a majority of people actually voting, to pass a constitutional amendment submitted by initiative.

It would treat every voter who didn’t turn out as a ‘no’ vote.

One thing that will change in next year’s session is how lawmakers debate abortion rights following the June decision overturning Roe v. Wade. That decision put Missouri’s strict abortion ban in place, denying abortions except in cases of a medical emergency.

While opponents of abortion rights have unassailable majorities in both legislative chambers, they will be on the watch for initiatives intended to put abortion to a statewide vote, said Sam Lee, a lobbyist for Campaign Life Missouri.

Abortion opponents will be playing defense, he said.

“Our overall goal,” he said, “is to keep in force what we have now.”