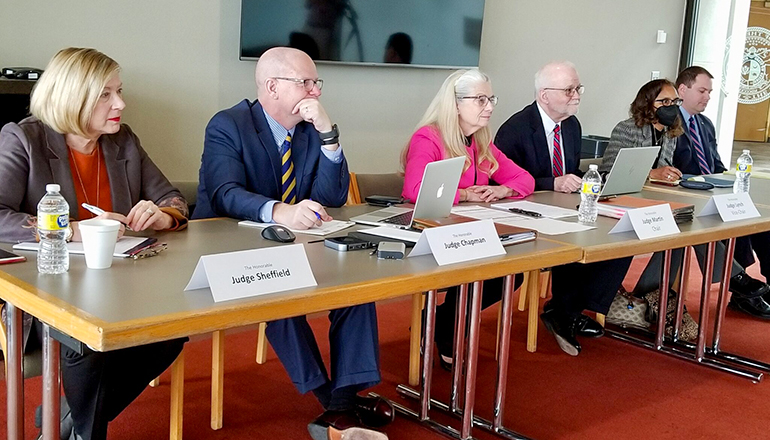 The new map, drawn by the Judicial Redistricting Commission after a citizen commission failed to reach consensus, will be formally submitted to the Secretary of State’s office Tuesday. Its release comes just two weeks before filing closes for potential candidates to be on the primary ballot in August.

“The Judicial Redistricting Commission’s work has been thorough and labor-intensive, and was purposefully undertaken with the goal to file a constitutionally compliant plan and map well in advance of the commission’s constitutional deadline to avoid disenfranchising voters given the candidate filing deadline and the deadline for preparing ballots,” said Western District Appeals Court Judge Cynthia L. Martin, who chaired the commission.

Among the changes under the new map: The 20th District, which previously was made up of the parts of Greene County outside of Springfield and Christian County, has shifted its boundaries to drop Christian County and pick up Webster, Dade, and Barton Counties. The incumbent in that district, state Republican Sen. Eric Burlison of Battlefield, is giving up his seat to run for Congress.

The 34th District used to include both Platte and Buchanan Counties. But under the new map, Buchanan would be split into two different districts, with the eastern half added to the 12th District.

The incumbent, Republican Sen. Tony Luetkemeyer of Parkville, is running for a second term in the district.

The 10th District, which previously included Audrain, Callaway, Lincoln, Monroe, Montgomery, and Warren counties, now dips down to take in a portion of St. Charles County in the St. Louis suburbs. The incumbent, Republican Sen. Jeanie Riddle, is leaving office due to term limits.

The new boundary lines allow former Rep. Bryan Spencer of Wentzville to run in the district. He filed for the seat last month and will likely face off with Republican Rep. Travis Fitzwater of Fulton.

According to the St. Louis Post-Dispatch, Democratic Rep. Tracy McCreery, who planned to run to replace term-limited Sen. Jill Schupp in the 24th District, would live in the 14th District — represented by Democratic Sen. Brian Williams — under the new map.

A pair of current state senators were also drawn into the new 31st District, though the seat won’t be on the ballot this fall.

GOP Sens. Rick Brattin of Harrisonville and Denny Hoskins of Warrensburg saw their counties combined into one district under the new map. Brattin was elected to his first term in 2020 and isn’t up for re-election until 2024. Hoskins won his second Senate term the same year, meaning he can’t run for re-election again.

The 19th District, which has been represented by a Republican in the state Senate since 2009, would now only include Boone County, likely creating a Democratic district. It is currently represented by Senate Majority Leader Caleb Rowden, R-Columbia.

The 11th District, centered on Independence and held by Democratic Sen. John Rizzo, was redrawn to take in more Republican-leaning areas of eastern Jackson County.