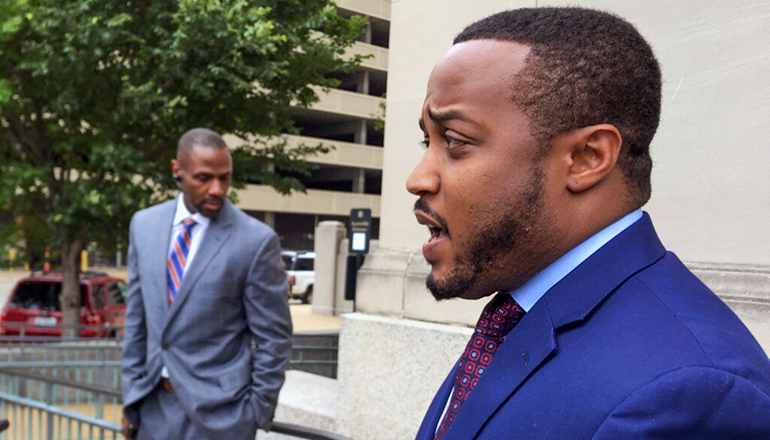 (Missouri Independent) – An ex-FBI agent who conducted the criminal investigation of former Missouri Gov. Eric Greitens in 2018 pleaded guilty Wednesday to evidence tampering and was sentenced to a year of probation.

William Tisaby, 69, was hired by St. Louis Circuit Attorney Kim Gardner to assist in the investigation of allegations that Greitens threatened to release a nude photograph of a woman, taken against her will while she was blindfolded and her hands were bound if she told anyone of a sexual affair.

Tisaby’s plea to a single misdemeanor count came as he was scheduled for trial on six perjury charges and one evidence tampering charge.

Jury selection was set to begin Thursday and the trial on Monday.

Tisaby, his family, and his attorneys made the decision to plead, after taking into consideration his current state of health, said his attorney Jermaine Wooten.

“I didn’t know whether he could withstand a full jury trial,” Wooten said.

Tisaby wants to “get the matter behind him and move on with his life,” he added.

Greitens, one of 18 candidates in this year’s Republican U.S. Senate primary, resigned as governor in late May 2018 as part of a plea deal to dismiss a computer tampering charge stemming from allegations that he stole from a veterans charity in order to boost his 2016 campaign.

Greitens has made Tisaby a central figure in his comeback narrative, painting the former governor’s entire prosecution by Gardner as a witch hunt that ended in exoneration.

In a statement released after the plea, Greitens said the plea shows the original allegations were false.

“The truth prevails,” Greitens said. “Those who made false accusations against me have been proven wrong once again.”

As he continues to pursue his campaign for U.S. Senate, there is no doubt Tisaby’s guilty plea will be a factor, said James Harris, a longtime GOP political consultant. In a campaign where Greitens is already desperately trying to tie himself to former President Donald Trump, Harris said the idea that a Republican could be unjustly prosecuted by a Democrat will resonate with many GOP primary voters.

“He will message that this was a witch hunt and that he was treated just like Donald Trump, as a way to inoculate himself from the credible accusations and multiple sworn depositions that the woman in question gave,” Harris said. “He will try to muddy the water.”

Greitens is “masterful” at misleading voters, Harris said, “so he will use this to his advantage.”

Jeremy Walling, a professor of political science at Southeast Missouri State University in Cape Girardeau, doesn’t think Tisaby will ultimately matter when compared to the allegations of abuse Greitens has faced for years.

“No one I know is talking about the Tisaby case,” he said. “But people still bring up the circumstances surrounding Greitens’ personal life.”

Johnson County Prosecutor Robert Russell, who was appointed special prosecutor in the case, said the misdemeanor count of evidence tampering is for Tisaby’s false testimony that he received no documentation from Gardner about the Greitens case before interviewing Greitens’ accuser and another witness in January 2018, the St. Louis Post-Dispatch reported.

Gardner hired Tisaby in January 2018, soon after Greitens was charged with invasion of privacy.

The charge stemmed from a 2015 affair and allegations that he threatened to release the photograph.

Greitens has repeatedly denied taking such a photo. But in an affidavit filed Monday in a child custody case, his former wife, Sheena Greitens, said he admitted taking the photo and threatened her if she disclosed that fact.

The Greitens divorced in 2020.

“After Eric admitted to me in late January 2021 that he had taken the photo that resulted in the invasion of privacy charge, he threatened that I would be exposed to legal jeopardy if I ever disclosed that fact to anyone, even family members or a therapist,” Sheena Greitens stated.

During the investigation, Gardner said she needed to hire Tisaby because the St. Louis Metropolitan Police Department refused to look into the case. The department said it was never asked to investigate.

On March 19, 2018, Greitens’ defense team deposed Tisaby for approximately nine hours, and at that time Tisaby “reserved signature” — meaning he requested a copy of his deposition so he could review it before he signed it, Tisaby’s attorneys have previously argued. Thirty-six days later, Tisaby was scheduled for a second deposition, yet he had still not received a copy of his first one, his defense said.

Tisaby hired a lawyer and attempted to obtain a continuance, or extension, to have a chance to review the deposition and clear the record if needed.

However, the court denied Tisaby’s request, and Wooten advised him to plead the Fifth Amendment during the second deposition.

Greitens’ attorneys accused Tisaby of lying about whether he had taken notes during an interview with Greitens’ alleged victim. The police department investigated this claim, which spurred the grand jury proceedings.

While the indictment was for Tisaby, Gardner’s actions were highlighted just as much in the 30-page document. The indictment states that Gardner was present during Tisaby’s deposition and knew what he said was wrong but didn’t correct the record.

Gardner has contended that Tisaby’s indictment was actually an attempt to remove her — the city’s first African American circuit attorney — from elected office.

In January 2020, Gardner filed a federal lawsuit under the Klu Klux Klan Act against the previous special prosecutor, the city, and the police union, alleging a civil rights conspiracy. The suit, which was dismissed, states that the entities named never intended to convict her or Tisaby of a crime but to impede her efforts “to stand up for the equal rights of racial minorities in St. Louis.”

An ethics complaint against Gardner, which mirrors much of the information in the Tisaby indictment, was recently filed with the Office of State Courts Administrator.

A three-member panel will review the complaint in April.

(Main Photo: Daniel Dailey, attorney for William Tisaby, spoke to the media after a hearing on June 24. Jermaine Wooten (left), also a defense attorney in the case, listens in (Photo by Rebecca Rivas – Missouri Independent).