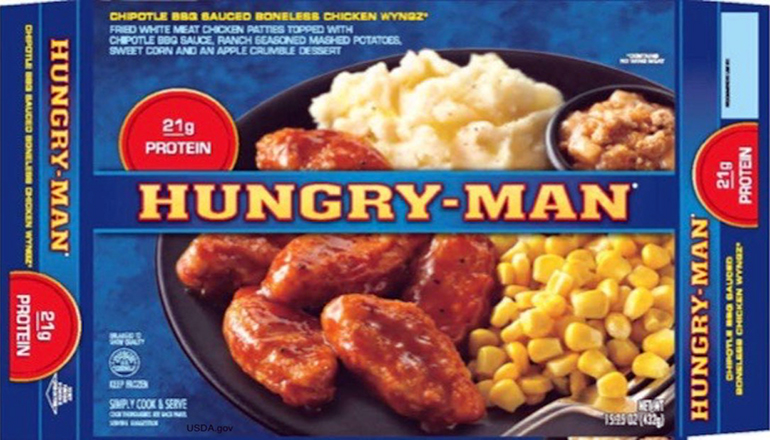 Federal officials have posted a public health alert regarding certain Hungry Man frozen dinners because of concerns about Salmonella contamination of whey powder used to make them. One day earlier, Flowers Foods Inc. recalled swiss roll desserts from stores nationwide because Salmonella was found in whey powder used in their production.

Government officials had not received any reports of confirmed illnesses in relation to the frozen chicken dinners that were produced by Pinnacle Foods Inc., according to the alert from USDA’s Food Safety and Inspection Service (FSIS). There is concern that consumers who have already purchased the implicated chicken dinners may still have them in their freezers.

The recall notice posted on the Flowers Foods corporate website reported the company had not received reports of any illnesses related to the multiple brands of swiss rolls it recalled this week.

“The whey powder is an FDA-regulated product that is being voluntarily recalled by the producer, Associated Milk Producers Inc.,” according to the FSIS health alert about the Hungry Man frozen dinners.

Generally, food ingredient producers do not publicly announce recalls of their products. Rather, they are allowed to notify their customers privately. The FDA does not, as a general practice, reveal such information because of concerns about “confidential corporate information” referred to frequently as CCI.

Consumers can identify the Hungry Man dinners that are the subject of the FSIS public health alert by looking for the following label information:

15.25-oz. individual frozen microwavable dinners with “HUNGRY MAN CHIPOTLE BBQ SAUCED BONELESS CHICKEN WYNGZ” printed on the label and a “best-buy” date of 9/6/19 and the establishment number “EST. P138” or “P-138” on the side of the carton.

“Consumers who have purchased these products are urged not to consume them. These products should be thrown away or returned to the place of purchase,” according to the FSIS public alert.