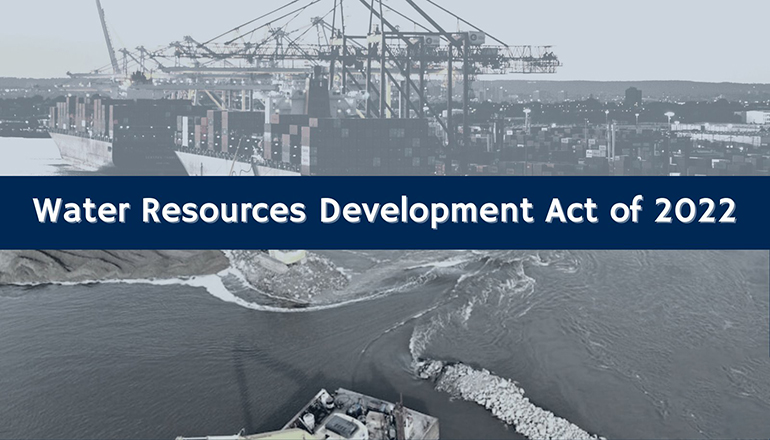 The House of Representatives passed the Water Resources Development Act of 2022, a bipartisan bill that will improve ports and harbors, inland waterway navigation, flood and storm protection, and other water resources infrastructure throughout the United States.

Congress has regularly approved bipartisan WRDA legislation every two years since 2014 to authorize water resources infrastructure projects carried out by the United States Army Corps of Engineers (Corps).  With the Nation continuing to deal with the impacts of a supply chain crisis, there is an urgent need to move forward with projects and policies that strengthen this vital component of the transportation network.

This year’s WRDA, H.R. 7776, focuses on projects that are locally driven but have regional and national benefits, rather than on significant national policy changes.

“Effective ports, inland waterways, and flood protection infrastructure all help to strengthen and keep our economy moving, and with the current supply chain crisis, it’s more critical than ever to support water infrastructure and protect our communities,” said Transportation and Infrastructure Committee Republican leader Sam Graves (R-MO).  “Flood protection, in particular, is something North Missouri relies on, and when the Missouri and Mississippi Rivers are mismanaged, it not only damages navigation channels that are essential to our economy, it also threatens the people and property along the Rivers.  It’s critical to make sure the Corps does not lose focus of its navigation and flood control responsibilities, and this bill does just that.”

The official text of the legislation is available here.

More information on WRDA 2022 can be found here.

The bill includes the following priorities for North Missourians:

WRDA 2022 places strict limitations on the construction of new IRCs on the Missouri river and ensures the Corps of Engineers takes immediate action to address any negative impacts on navigation, flood control, or bank erosion caused by the construction of IRCs. Additionally, the bill requires all mitigation lands along the Missouri River acquired with federal funds to be counted towards the Bank Stabilization and Navigation Fish and Wildlife Mitigation Projects goal of 166,000 acres. Currently, only lands acquired or mitigated with Corps of Engineers BSNP Mitigation funds can be counted. Land mitigated with funding from other federal agencies is not counted.

This legislation creates a new demonstration program to address bank erosion impacting levee districts and private landowners on the Lower Missouri River based on prior efforts on the Upper Missouri River.