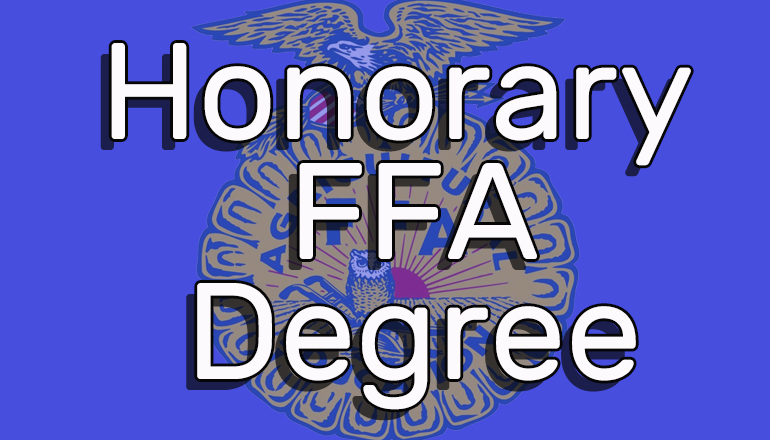 At the state convention. the Missouri FFA Association has presented HONORARY state degrees to several education agriculture leaders and officials. Among the recipients from northern Missouri are Carmen Buller of Kirksville, Brooke Swindler of Norborne, Connor Dignan of Mound City, Tom Zweifel of Maryville; Jason Dimmitt and Ashley McCarty – both of Kirksville.

Brooke Swindler of Norborne has been an agriculture instructor and FFA advisor for 15 years: 13 years at Carrollton and 2 years at Tina-Avalon. She has served on Missouri Vocational Agriculture Teachers Association committees as well as the National FFA Agriscience Committee. Throughout her career, students have received 43 American FFA Degrees, 61 State FFA Degrees, one was named state a Star in Placement and 11 named area stars. Her chapters have won 113 first-place area proficiency awards with 13 state winners and 1 National FFA winner.

Connor Dignan is in his sixth year of teaching ag education at Mound City R-2. He was a member of the Worth County FFA Chapter in high school. Dignan attended Northwest Missouri State University majoring in agricultural education. Dignan has had many past students receive their State and American FFA degrees. He is currently the state chairman of the Area Teacher Welfare Committee through the Missouri Vocational Agriculture Teachers Association.

Tom Zweifel is an assistant professor of agronomy at Northwest Missouri State University of Maryville. His duties have included being superintendent for the agronomy career development event every fall and the Northwest district agronomy contest each spring since 1985.

Ashley McCarty of Kirksville is the executive director of Missouri Farmers Care. She was a Kirksville FFA member while attending school. She volunteers as a judge for FFA career development events. Her work at Missouri Farmers Care allows her to build partnerships with FFA through the Drive to Feed Kids and Agriculture Education on the Move programs. She previously coordinated the Missouri Agribusiness Academy as an employee of the Missouri Department of Agriculture.