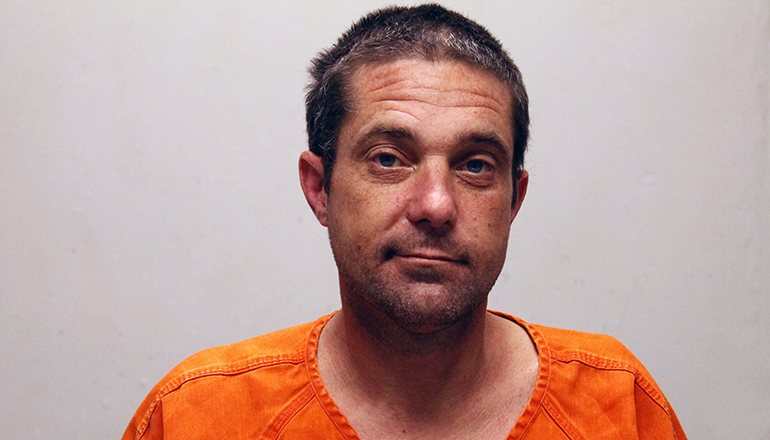 A Hale man facing felony charges following an investigation into an alleged incident in Bedford this weekend has been found in contempt of court.

Online court information shows 39 year old Gary Forrest Goodhart has been charged with the felonies of driving while revoked or suspended and resisting arrest, detention, or stop by fleeing—creating a substantial risk of serious injury or death to any person. His bond is 25 hundred dollars cash only with Supervision Services. The court denied a request for bond change yesterday (Monday), and a bond hearing is set for tomorrow (Wednesday) (at 9 am).

Goodhart reportedly became profane and insulting and yelled at the judge while being arraigned via video yesterday (Monday). He was sentenced to 60 days in the Daviess DeKalb Regional Jail plus court costs for being in contempt of court. The sentence is to be served consecutively with all other sentences.

Cox says Goodhart allegedly trespassed on private property, exposed himself, cursed, made threats to a victim while carrying a large knife, and refused to leave Saturday morning. He also allegedly made advances toward a citizen while armed, and

the reported victim displayed his firearm ordering the suspect to back down and away. The suspect then reportedly fled from the area on an all terrain vehicle when he heard sirens of approaching law enforcement.

The Highway Patrol and a Missouri Department of Conservation agent assisted the sheriff’s office in a criminal investigation. Goodhart was unable to be located Saturday.

Cox reports Livingston County Sheriff’s Office Detective Ryan Ford was in the Bedford area Sunday afternoon following up on the investigation when he observed Goodhart on an ATV. Ford attempted to stop him, but he allegedly fled on the ATV down several roads. The deputy requested assistance from area law enforcement.

The deputy is said to have chased the suspect into Hale in Carroll County. Cox notes Goodhart drove around the town at a slow speed and displayed sign language towards the deputy. Chief Deputy Michael Claypole arrived and stopped ahead of the suspect, which prompted him to stop and surrender without further incident.

Officers reportedly discovered a large sheath for the suspected knife reported Saturday and also a methamphetamine smoking pipe. The items were turned over to the Carroll County Chief Deputy for a potential criminal charge in Carroll County. The ATV was towed from the scene.