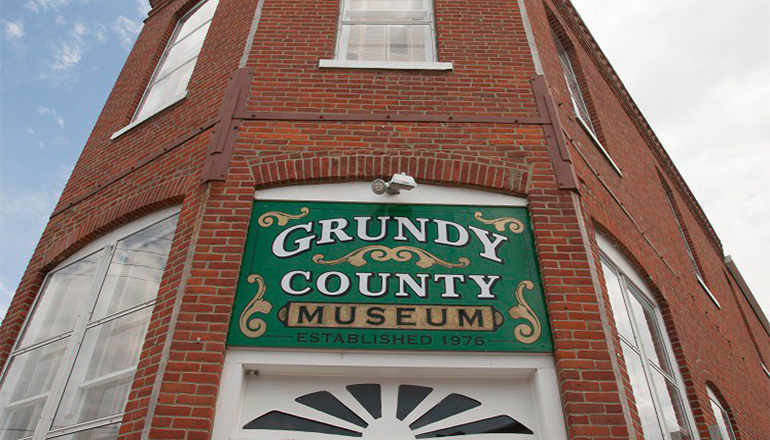 Only six days remain to see the museum’s 2018 sports exhibit, Hometown Teams; the museum closes for the season October 21.

This sports exhibit identifies and celebrates the records of Grundy County’s athletes competing in American Legion teams, Trenton Merchants Teams, TBA and all the County’s K-12 Public School and NCMC. In addition to a display of sports equipment and school memorabilia, such as uniforms and trophies, 25 information and photo panels highlight each of Grundy County’s five schools and all the sports played by high school teams. Video interviews run continuously as local sports personalities recall their experiences as players and coaches, for example, Mike Arbuckle, Jerry Lafferty, Ron Hurst, Wes Croy Steve Marlay and Steve Hudson.

Ever wonder who Burleigh Grimes was? The museum “tells all!” “Ol Stubble Beard,” as he was called, pitched 314 complete games, won “20 games” five times, managed the Brooklyn Dodgers and is in the Baseball Hall of Fame, and yes, he also lived in Trenton.

Special hours will be in effect Saturday, October 6 to coincide with and support the Car Show on Main Street. On Saturday, October 6, the museum will extend the hours to 7:30 pm. There are no fees during these extended hours and we will display an antique mileage calculator sign from the Helmandollar Motor Company. This clever mileage and route calculator, about 1920, was the GPS of Grundy County.

The regular exhibit hours at Grundy County Museum are 1:30 – 4:30 weekends and holidays. Groups can be accommodated at other times.