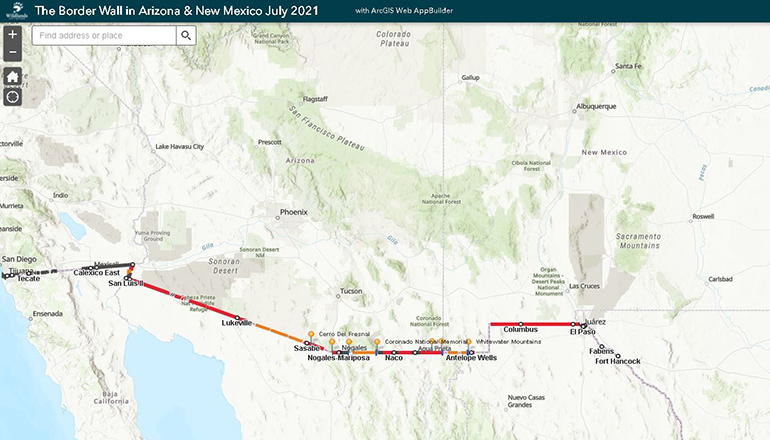 A newly-released map identifies portions of the U.S.-Mexico border wall built by the Trump administration, and for conservation groups and wildlife advocates, it is alarming.

The Biden administration halted construction and said it will use federal funds to assess the damage caused by the new, higher walls.

Myles Traphagen, borderlands program coordinator for the Wildlands Network who created the map, said in addition to environmental damage, the project identified several areas in border states where restoration to benefit wildlife is needed.  “There’s very high biodiversity in southeastern Arizona, southwestern New Mexico,” Traphagen explained. “It’s a meeting ground of the neotropics and the temperate zones. It’s the only place where the jaguar and the black bear share the same trail.”

Upon halting border-wall construction, the Biden administration said it plans to perform environmental assessments, which had been waived by Trump to speed construction.

The map was developed through remote sensing and extensive on-the-ground fieldwork to assess what was completed and the progress of sections that were not completed. The Great Old Broads for Wilderness assisted in on-the-ground surveys through portions of Arizona.

Michael Dax, western program director for the Wildlands Network, said the map may surprise some who do not realize the extent of the wall built in three years, or how much of North America has been walled off from Mexico.

“The Trump administration was sadly very successful in building significant portions of the wall,” Dax confirmed. “It has been hugely impactful to wildlife. There are numerous pictures of wildlife that are dead along the wall, not able to reach historic water sources.”

Traphagen emphasized some border landscapes in New Mexico have been permanently altered, including one area where a high-speed road was built and stadium lighting installed.

Numerous species including deer, pronghorn, bear, javelina, and mountain lion have been impacted by the wall, which has isolated these binational populations. Additionally, a jaguar was recently spotted in the Sky Islands of southeastern Arizona—only the seventh sighting in the past 25 years. Connectivity between the U.S. and Mexico will be essential for the species’ long-term recovery, especially as more animals attempt to travel north into historically occupied habitats.

“And now, there’s no ability for pronghorn antelope, and coyotes and all the other creatures, to move freely across the landscape that they’ve inhabited for tens of thousands of years,” Traphagen contended.

“They just were throwing it up as fast as they possibly could,” Traphagen observed. “And the construction companies basically got up and left. There’s just debris littering the entire border.”