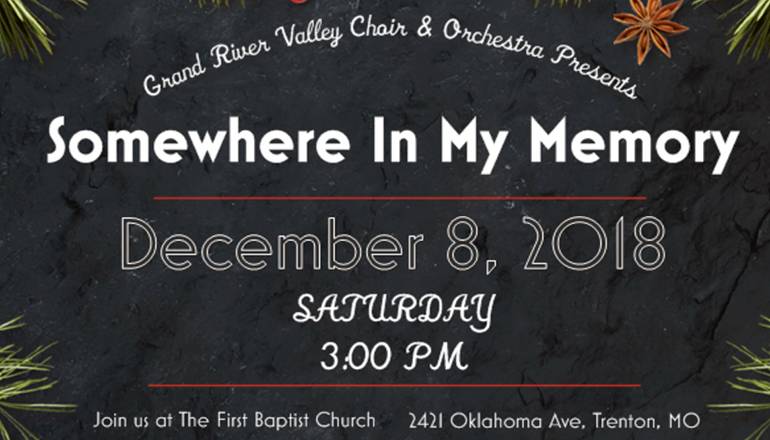 The Grand River Valley Choir and Orchestra will present their annual Winter Concert on Saturday, December 8, at 3:00 p.m. at the First Baptist Church on Oklahoma Avenue in Trenton. The doors to the Sanctuary will open at 2:30 p.m. at the conclusion of the dress rehearsal.

Grand River Valley Choir and Orchestra will present a collection of seasonal music that is sure to put you in the Christmas Spirit. Thanks to the generous public donations new music has been purchased for the occasion. The theme of the concert is “Somewhere in My Memory” which is one of the songs performed by both the choir and orchestra from the motion picture “Home Alone.” Additional songs on the program are “Sleigh Ride”, “White Christmas”, three selections from “How the Grinch Stole Christmas”, highlights from “A Christmas Festival”, and Christmastime”.  Monica Fawson will be the Choir Director and conduct the combined performance of both the orchestra and choir. Cathie Lowrey is the pianist. The Orchestra Director is Buddy Hannaford. The performing musicians from the choir and orchestra come from the Grand River Valley area including Trenton, Jamesport, Chillicothe, Laredo, Milan, Gallatin, Cameron, Princeton, Ludlow, Pattonsburg and Marshall.

There is no charge for the concert, however, the GRVCO will be accepting donations to both a public charity that will be announced the night of the concert and to the Grand River Valley Choir and Orchestra. The GRVCO is a public charity with a 501(C) 3 determination from the IRS.  Certificates of Recognition will be presented to members of the GRVCO Donor’s Club at the beginning of the concert for the top three levels of giving.

Join the GRVCO members after the performance for a cookie reception in the basement of the First Baptist Church.