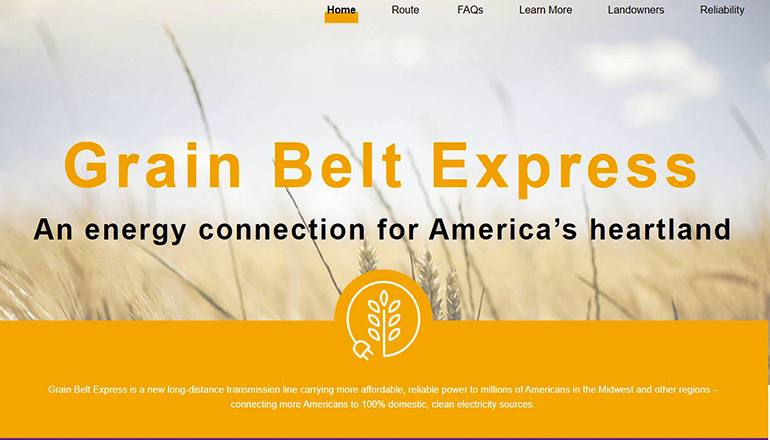 Grain Belt Express is an 800-mile high-voltage transmission line meant to carry renewable energy from wind-swept western Kansas across Missouri and Illinois to the Indiana border.

Its developer, Chicago-based Invenergy, previously planned to build a line with a 4,000-megawatt capacity and drop off about 10% of the power in Missouri. It said Monday in a press release that it will now be a 5,000-megawatt line that drops off half of its power in the state.

Invenergy executives announced the expansion in St. Louis with business groups from Missouri and Illinois. In the press release, Shashank Sane, Invenergy’s executive vice president and head of transmission, said the company is proud to be offering solutions as customers face rising energy costs and grid operators worry about rolling blackouts.

“By increasing total power delivery for the Grain Belt Express and ensuring an equal share is available locally, this state-of-the-art transmission infrastructure project will save families and businesses billions of dollars in electric costs each year, protect our communities by improving reliability, and power prosperity across the Midwest well into the future,” Sane said.

“Grain Belt Express’s additional commitment to deliver more power to Missouri could not have come at a better time for businesses in our region who are facing increased risk for outages and higher energy bills due to more demand and less energy production,” Ray McCarty, CEO of Associated Industries of Missouri, said in the news release.

The company announced it would also take a phased approach to building the line. It will begin construction in Kansas and Missouri first to bring project benefits to consumers faster.

Grain Belt Express has been a political hot button for years because Invenergy has to acquire easements on private land to build the line.

The company has obtained those easements on more than half of the parcels it needs in Kansas and Missouri, but it also has the power of eminent domain to use the land of unwilling landowners for some compensation.

Republican legislators tried many times to, in essence, strip Grain Belt’s right of eminent domain and kill the project. This year, they passed compromise legislation requiring, in the event of future large transmission lines, more compensation for landowners and setting a seven-year time limit for companies to build transmission lines after obtaining their easements.

It would also require that court-appointed commissions tasked with determining the fair market value of a farmer’s land during eminent domain proceedings include a farmer who has lived in the area for at least a decade.

Previous versions of the bill would have required that at least 50% of power carried by a transmission line be dropped off for use by Missouri ratepayers. The compromise version would require that an amount of power proportional to the length of the line through Missouri be made available to residents.