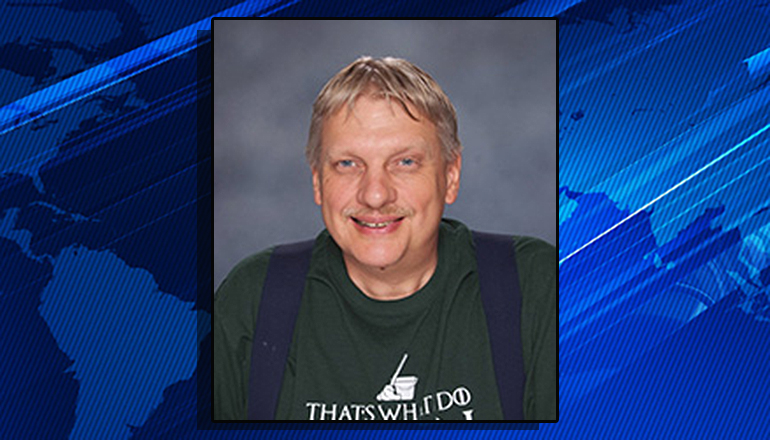 “It’s all about family,” this year’s THS Alumni Honoree calls Trenton High School – it’s administration, it’s faculty and it’s students – family! Graham McVay definitely bleeds black and gold and after a long visit with him, it is so obvious how much he loves Trenton High School and is such a deserving honoree by the Class of 1995. Growing up a single child and with little relatives around, Graham quickly saw the THS family as his own.

The son of Bob and Barbara Perry McVay, his mother was an only child and his uncle had no children so the only “so-called siblings” that Graham had were first cousins living in Michigan and Colorado. He has lived a simple life but by his choosing. A proud graduate of Trenton High School, Class of 1982, Graham enjoyed school and his extra-curricular activities included golf and basketball where he played Junior Varsity. “Only once did he play varsity on the golf team that was by accident when another golfer made a mistake with Coach Ron Hurst and Graham moved to varsity for one meet and the details will remain unknown!”

After high school graduation, Graham headed off to the University of Missouri and only one semester showed the quiet and reserved McVay that a University the size of MIZZOU was not for him. He returned home and after a year and a half, graduated from Trenton Junior College with his Associate in Arts Degree. Following his completion of his two-year degree, Graham transferred to Missouri Western University where he completed his Bachelor of Science degree in Agriculture. The 1988 University graduate had fulfilled his goal and it was off to find a job.

Graham began part-time in the custodial department of the Trenton School System filling in at Norton, SM Rissler, Adams Jr High, and THS when custodians were ill or other circumstances created openings. And when a staff member left for knee surgery, Graham once again filled in. It was not until a few weeks later that the absentee custodian chose not to return to work and Director of Supportive Services Larry Bailey offered Graham full-time employment and the rest is history.

Now after 32 years of employment with the Trenton R-9 School District, Graham feels right at home and has seen several changes along the way. “The addition of the Ron Hurst Wrestling Room and the weight room were much needed,” says Graham, “thus allowing us from having to tear down the THS Commons every night before wrestling practice and then return the room to normalcy following practice.”

Other changes that our honoree has seen include the addition of the Middle School to the High School campus adding a more ideal setting for the students and from his perspective, the removal of so many windows with the new addition made it much easier to maintain. When asked about the addition of the new Performing Arts Center, Graham is excited with the addition and is always proud when improvements are made to his Alma Mater. Graham notes the changes in school security that have made a big difference in responsibilities for him.

Graham’s work schedule begins around 6:30 am but he will tell you, he is always arriving early as there are lots of things to complete before the arrival of students and staff. By the end of the day, Graham calls it day at 2:30 and its home to just relax. How does he do that? He enjoys putting model airplanes and cars together, a hobby he has shared for many years. In addition, he is a huge fan of reading, especially mysteries, and his favorite author is Sir Arthur Conan Doyle – the creator of Sherlock Holmes mysteries. As if he hasn’t put enough miles in during the day, he also enjoys the walking trail around the campus and through the parks – quick to tell you it is 1.3 miles around the trail once!

Graham has lots of stories to tell about his 30 plus years but one of the most treasured was his nomination to the National Custodian of the Year Contest in 2019. Graham was notified by THS Instrumental Music Instructor Tim Gillham that he had submitted Graham for the award. After weeks of voting from across the U.S., Graham was chosen to the top ten finals and in competition for prizes and recognition. Alums, school personnel and the community were active in voting for Graham and even though he didn’t take the top prize, he was humbled by the support and the number of people who would stop him in the local store and say, “I voted for you Graham!” One more sign of being a part of one big family for Graham.

Lots of different bosses for Graham has meant a lot to him. He says “some were better than others,” but never divulging who was and who was not. Graham can quickly tell you the names of the School Superintendents he has worked under, the names of the THS Principals who he answered to and the names of the Directors of Supportive Services who were his direct supervisors and how long each served the R-9 School District.

Graham hopes to work awhile longer if his health will allow as he would definitely miss the everyday contact with “his kids” and “his co-workers!” He says, the students are not really his kids, but he likes to call them that. For that reason and many more, it is obvious that the ‘kids of 1995” have that same appreciation of their friend Graham and so have so many other classes seen Graham as a part of their THS family.