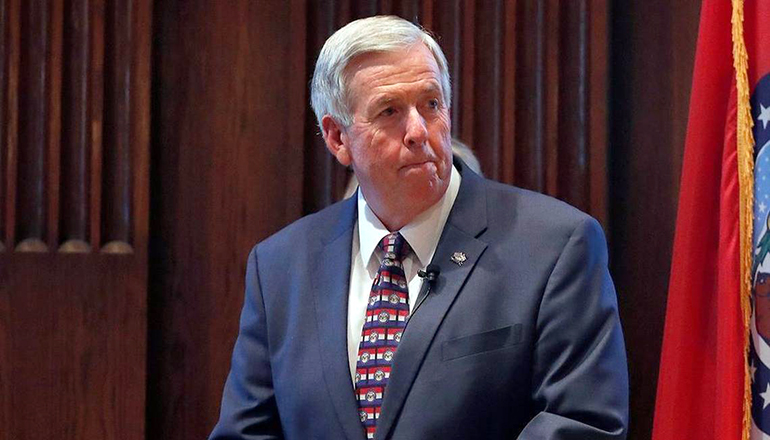 Samuel Adams, of Ferguson, was appointed to the State Board of Mediation.

Mr. Adams has served as business representative and organizer for the St. Louis – Kansas City Carpenters Regional Council since 2017. Mr. Adams has more than 15 years of experience as a union carpenter, serving as job steward, foreman, and general foreman. He completed the St. Louis Carpenters’ Joint Apprenticeship Program and holds a certification from the United States Department of Labor. Mr. Adams is a St. Louis native and graduate of Cleveland Junior Naval Academy.

Dr. Meghan Arnold, of St. Louis, was appointed to the Missouri State Board of Podiatric Medicine.

Dr. Arnold is the Physician Owner of St. Louis Foot and Ankle Institute, LLC, a private practice established in 2020. Previously, she was employed by Mercy Clinic Orthopedics in St. Louis. Dr. Arnold has been providing diagnosis, medical, and surgical management of all disorders of the foot and ankle in the St. Louis area for nearly 10 years. She is certified by the American Board of Podiatric Medicine and the American Board of Foot and Ankle Surgery. Dr. Arnold earned her Doctor of Podiatric Medicine from Rosalind Franklin University of Medicine and Science in North Chicago, Illinois, and completed her residency program in Missouri at Mineral Area Regional Medical Center and St. Clare Hospital.

Jeremy Benson, of Belton, was appointed as the Cass County Auditor.

Mr. Benson began working for Cass County in 2016 as a Deputy Public Administrator and became Deputy Cass County Auditor in 2019. Mr. Benson holds a Bachelor of Science in criminal justice from the University of Central Missouri and a Master of Business Administration from Purdue University.

Danny Chadakhtzian, of Des Peres, was appointed to the Missouri Housing Development Commission.

Dr. Edward Cline, of Hannibal, was appointed to the Missouri State Board of Podiatric Medicine.

Dr. Cline has been affiliated with Hannibal Regional Healthcare System and Pike County Memorial Hospital for more than 20 years providing podiatric medical services in Hannibal and the surrounding areas. Dr. Cline is a member of the American Board of Podiatric Surgery and the Missouri Podiatric Medical Association. He is also a member of the Missouri Podiatric Medical Association Board of Directors, having served as President, Vice President, and member-at-large. Dr. Cline holds a Doctor of Podiatric Medicine from the University of Osteopathic Medicine and Health Sciences in Des Moines, Iowa, and completed his first and second-year surgical residency programs at Broadlawns Medical Center also in Des Moines, Iowa.

Jamie Goodwin, of Monticello, was appointed as the Lewis County Circuit Clerk.

Mr. Goodwin has worked for the Missouri Department of Corrections as a Probation and Parole Officer since 2001. In this capacity, he serves as court liaison to two area circuit courts in addition to his various other duties. Mr. Goodwin holds a Bachelor of Science in justice systems from Truman State University.

Bobbi Lear, of Bolivar, was appointed as the Polk County Clerk.

Ms. Lear has past experience working as an underwriter for Polk County Mutual Insurance Company and as a district manager for Western Shamrock Corporation. More recently, she has held managerial positions with Wal-Mart and Woods Supermarket. Ms. Lear holds an associate degree in business management with an emphasis in accounting from the University of Phoenix.

Jennifer Middleton, of Wellington, was appointed as the Lafayette County Clerk.

Ms. Middleton has served as Deputy Lafayette County Clerk since 2018. Previously, she served as a substitute teacher for the Wellington-Napoleon R-9 school district. Ms. Middleton holds a Bachelor of Science in equine sciences from Colorado State University.

Stephen Parshall, of Columbia, was appointed to the Missouri Housing Development Commission.

Mr. Parshall joined UMB Bank in 2013 as Senior Vice President of Commercial Lending. He is responsible for business development, relationship management, and credit in central and greater Missouri for UMB. Previously, Mr. Parshall was Second Vice President of Government Accounts for Central Trust Bank and was responsible for relationship management of government, association, and non-profit client portfolios. He is a board member of the Missouri Colleges Fund and Woodhaven. He also sits on the Special Olympics of Missouri Finance Committee. UMB Bank named Mr. Parshall as Rookie of the Year in 2015 and Top Community Producer in 2016. Mr. Parshall holds a Bachelor of Arts in geography from the University of Missouri-Columbia.

Gail Perryman, of Urich, was appointed as the Henry County Recorder of Deeds.

Ms. Perryman has been with the Clinton Public School district since 1993, serving as an elementary education teacher and more recently as a title reading and math teacher. She and her husband have been residents of Henry County for nearly 30 years where they manage their Red Angus beef cattle operation and family-owned catering business. Ms. Perryman holds a bachelor’s degree in elementary education from the University of Central Missouri and a master’s degree in education specialist administration from William Woods University.

Pam Robertson, of Mount Vernon, was appointed as the Lawrence County Recorder of Deeds.

Sheila Solon, of St. Joseph, was appointed as the Acting Director of the Division of Professional Registration.

Ms. Solon has served eight years as a Missouri State Representative. She represented Blue Springs and Lee’s Summit constituencies from 2010 to 2016 and was elected to serve Buchanan and Andrew County constituencies in 2018. Ms. Solon has served on several Missouri House of Representatives committees, including Rules-Administrative Oversight and Local Government and Veterans. She also served as Chair of the Children and Families Committee. Previously, she has served as Mayor Pro-Tempore of the Blue Springs City Council and Chair of the City of Blue Springs Planning Commission.

Carrie Ward, of Winfield, was appointed as the Lincoln County Auditor.

Ms. Ward has served as Deputy Treasurer of Lincoln County since 2014. Previously, Ms. Ward was a Business Analyst and Team Lead for CitiMortgage in O’Fallon. Ms. Ward holds a Bachelor of Science in Business Administration from Missouri Baptist University in St. Louis.