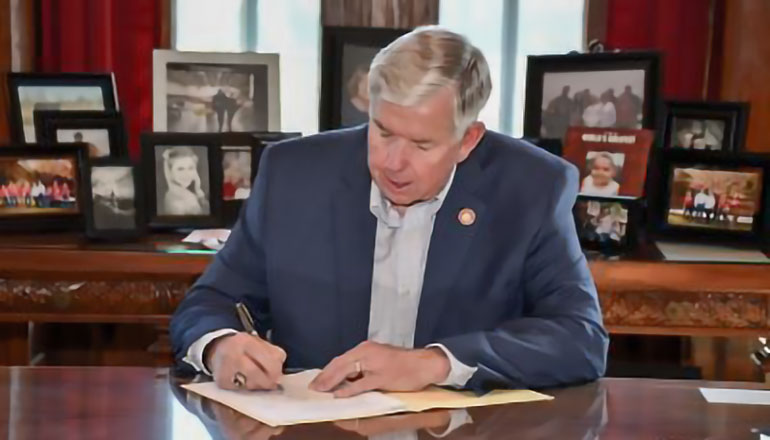 Sheriff Jim Arnott, of Springfield, was appointed to the Peace Officer Standards and Training Commission.

Sheriff Arnott has served as the Greene County Sheriff since 2008. He has also simultaneously served as the Interim Chief of the Fair Grove Police Department and Ash Grove Police Department during two separate vacancies. Prior to being elected Sheriff, he was the Chief Deputy of the Greene County Sheriff’s Office for four years after rising through the ranks from patrol deputy. During his tenure, the Sheriff’s Office has formed a Psychology Unit, become the only Sheriff run jail in Missouri to earn a National Commission on Correctional Health Care Accreditation for its medical department, and formed the Professional Standards division. He is a member of the National Sheriff’s Association, Missouri Sheriff’s Association, Justice Reinvestment Executive Oversight Committee, and the Child Advocacy Center Board of Directors. Sheriff Arnott is a graduate of the FBI National Academy, National Sheriff’s Institute, and Drury University Law Enforcement Academy. He earned a Bachelor of Science in criminal justice administration from Columbia Southern University.

Thomas Brown, of Kansas City, was appointed to the Clay County Board of Election Commissioners.

Mr. Brown served as the Chief of Staff for the Office of U.S. Congressman Sam Graves for nearly 15 years. Prior to joining Congressman Grave’s office, he served as the Clay County Western District Commissioner and was the Chief Executive Officer of the Hays Companies. Mr. Brown is currently a member of the St. Luke’s Health System Board of Directors and Tri-County Mental Health Board. He was named Northlander of the Year by the Northland Chamber of Commerce in 2018. Mr. Brown earned a Bachelor of Science in Education from Missouri Southern State University.

Michael Keeven, of Beaufort, was appointed to the Well Installation Board.

Mr. Keeven is the owner of Keeven Heating and Cooling, a family-owned HVAC operation that has been in business for more than 35 years. He has worked as a heating and cooling technician and installer for more than 30 years. Mr. Keeven is a certified Heat Pump Installer and Driller by the International Ground Service Heat Pump Association and a Geothermal Well Driller and Water Well Driller by the Missouri Department of Natural Resources. He serves on the Board of Directors for Gateway HVAC Contractors. Mr. Keeven earned an Associate of Applied Science from East Central College.

Sheriff Katy Jo McCutcheon, of Fredericktown, was appointed to the Coroner Standards and Training Commission.

Sheriff McCutcheon has served as the Sheriff of Madison County since 2017 and the Director of Madison County 911 Communications since 2013. Previously, she served as a Deputy Madison County Sheriff for eight years. In 2011, she began working part-time for Follis & Sons Funeral Home. Sheriff McCutcheon earned her Missouri Funeral Directors License in 2013 and her Missouri Embalmers License in 2015, after graduating from the Des Moines Area Community College Advanced Mortuary Program.

Mark Pierce, of DeKalb, was appointed to the Clean Water Commission.

Mr. Pierce has owned and operated his own farming operation since 1977 and has been the President of Rippling Water Farms, Inc. since 2013. He has served on the FCS Financial Board of Directors since 2002 and has been the Vice-Chairman of the Board since 2012. Mr. Pierce also serves on the Farm Credit Council Board of Directors and has previously served on the Weston Missouri Levy District Board and Soil and Water Board of Platte County.

Michael Taylor, of Marshfield, was appointed to the Coroner Standards and Training Commission.

Mr. Taylor has served as the Webster County Coroner since his election in 2004. He joined the Marshfield Fire Protection District in 1989 as a firefighter and rose through the ranks to become Fire Chief, a position he has held since 2005. Mr. Taylor previously served as the Marshfield Director of Emergency Medical Services from 1995 to 2019. He is a licensed paramedic, certified EMS instructor, and is a member of the Missouri Coroner and Medical Examiners Association Board of Directors. Mr. Taylor received Medicolegal Death Investigator training from Saint Louis University School of Medicine and earned an Associate of Applied Science in fire science from Columbia Southern University.

Michael Wiegand, of Eureka, was appointed to the Peace Officer Standards and Training Commission.