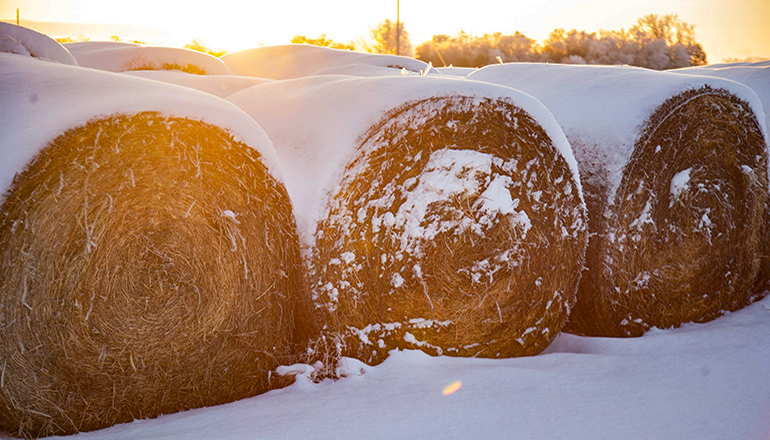 Pasture and hay supplies are short in many areas of central and southern Missouri. University of Missouri Extension livestock specialist Gene Schmitz has several options for livestock producers to consider for feeding their livestock this winter.

“This is the simplest, most cost-effective practice you can do,” said Schmitz. “Sort hay supplies into quality groups and match the hay to the nutritional needs of each group of livestock. Then feed the appropriate supplement, if necessary, to each separate group based on their nutritional needs and quality of hay being fed.”

Poor feeding practices can result in hay wastage of more than 25%. Cone-type hay feeders or tapered-bottom feeders greatly reduce hay waste, especially if they have a bottom skirt. If unrolling, limit the amount of hay being unrolled at a given time. Unrolling more than one day’s feeding will substantially increase hay waste.

It’s a bit late for this now, Schmitz said, but another substantial source of hay waste is how the hay is stored. If covered hay storage is not a possibility, at least take measures to break soil-hay contact. Building rock pads or storing bales on pallets, tires or some other surface reduces waste on the bottom of the bale.

Producers fortunate enough to have pasture or crop residues to graze can divide the fields into smaller areas with temporary fencing materials, Schmitz said.

“These are easy to move and can greatly extend the number of grazing days from a given area,” he said. “Fencing to provide one to two weeks grazing is acceptable.”

With adequate-quality forage, limiting cow access to hay feeders can reduce waste while achieving acceptable performance. Twelve-hour access seems to be a good compromise between performance and waste reduction, Schmitz said. Do not attempt this without a hay test, however.

Cows can be limit-fed a high-grain ration. This meets energy needs with less feed. Compare the cost of grain vs. hay on a per-unit-of-energy (TDN) basis when considering this option. Some producers graze standing milo as an effective, lower-cost way to feed cows through the winter.

Finally, Schmitz advises: “It may be more beneficial for the operation, in the long run, to cull animals rather than to try to purchase enough feed for the winter. This is not a one-size-fits-all option, however, so figure out your operational costs and evaluate tax and other financial implications before making final decisions.”

(Photo by Scott Ymker on Unsplash)