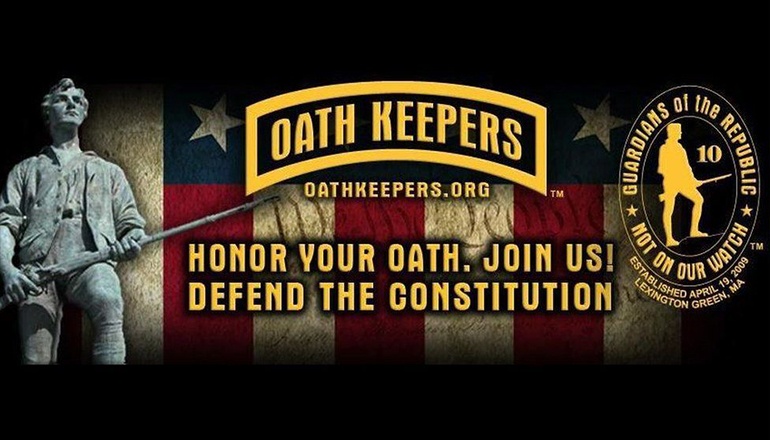 Jon Schaffer, 53, of Columbus, Indiana, admitted that he breached the Capitol on January 6, 2021, wearing a tactical vest and armed with bear repellent, and pleaded guilty to unlawfully entering the U.S. Capitol to obstruct Congress’ certification of the U.S. presidential election results.

“On this 100th day since the horrific January 6 assault on the United States Capitol, Oath Keepers member Jon Schaffer has pleaded guilty to multiple felonies, including for breaching the Capitol while wearing a tactical vest and armed with bear spray, with the intent to interfere with Congress’ certification of the Electoral College results,” said Acting Deputy Attorney General John P. Carlin.  “The FBI has made an average of more than four arrests a day, seven days a week since January 6th.  I commend the hundreds of special agents, prosecutors, and support staff that have worked tirelessly for the last hundred days to bring those who committed criminal acts to justice.”

“The defendant, in this case, admits forcing his way into the U.S. Capitol on January 6 for the express purpose of stopping or delaying congressional proceedings essential to our democratic process. These actions are disgraceful and unacceptable” said FBI Deputy Director Paul M. Abbate. “The FBI and our partners will continue to utilize all available authorities to aggressively investigate, pursue and hold accountable those who committed acts of violence or otherwise violated the rule of law that day.”

In his plea agreement, Schaffer acknowledged he is a founding lifetime member of the Oath Keepers, a large but loosely organized collection of individuals, some of whom are associated with militias.

In his plea agreement, Schaffer also acknowledged that on January 6, 2021, he was in Washington to attend the “Stop the Steal” rally at the Ellipse in Washington, D.C. to protest the results of the presidential election, which he believed were fraudulent. Schaffer wore a tactical vest and carried bear spray, a dangerous weapon and chemical irritant used to ward off bears. When the rally finished, Schaffer joined a large crowd that marched from the Ellipse to the Capitol, where a joint session of Congress, presided over by Vice President Michael Pence, was in session to certify the electoral college vote results. Shortly after 2:00 p.m., members of the mob forced entry into the Capitol building, disrupting the joint session and causing members of Congress and the Vice President to be evacuated from the House and Senate chambers.

In his plea agreement, Schaffer admitted that after arriving on Capitol grounds, he walked past barriers intended to restrict access to the public and to a set of locked doors on the Capitol’s west side.  At approximately 2:40 PM, Schaffer positioned himself at the front of a crowd that broke open a set of doors being guarded by four U.S. Capitol Police (USCP) officers wearing riot gear. Schaffer admitted to being among the first individuals to push past the damaged doors and into the Capitol building, forcing officers to retreat. Schaffer and others advanced toward five or six backpedaling USCP officers while members of the mob swelled inside of the Capitol and overwhelmed the officers. The officers ultimately deployed a chemical irritant to disperse the mob. Schaffer was among the people who were sprayed in the face, after which exited while holding his own bear spray in his hands.

Schaffer pleaded guilty to criminal information charging him with obstruction of an official proceeding and entering and remaining in a restricted building or grounds with a deadly or dangerous weapon. Combined, he faces up to 30 years in prison if convicted. The Honorable Amit P. Mehta accepted Schaffer’s guilty plea.