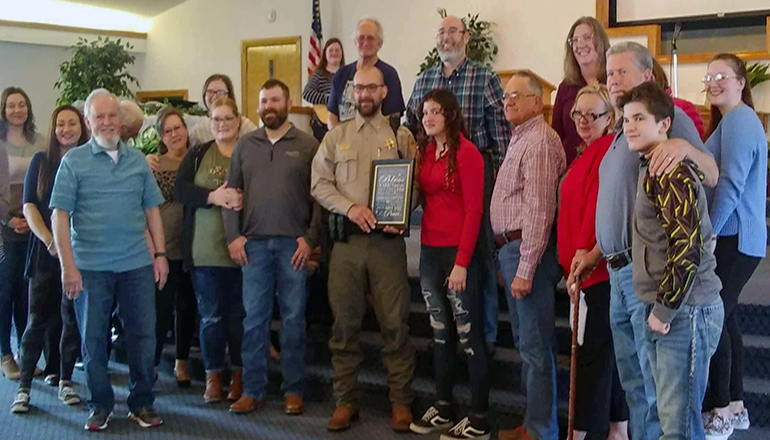 The First Baptist Church in Princeton reports those attending a service observed a special time of prayer for Mercer County Sheriff Jose Lopez and members of the sheriff’s office. Over 100 were present on Sunday.

The First Baptist Church, in what is called a partnership with the Princeton Chamber of Commerce, wanted to have a special time of prayer where they could ask God to bless the Sheriff and his staff as well as pray for their protection.

Chamber of Commerce President Amy Cool was credited with organizing the prayer gathering. She opened the special time with a custom prayer that she had composed especially for Sheriff Lopez. Pastor Abner Neill then prayed a blessing over the men and women of the Sheriff’s Office followed by a prayer for the Sheriff’s family. That was led by Riley Neill. Raymond Rogers then closed out the prayer time asking for God to continue blessings on Mercer County and its citizens.

Pastor Neill then presented Sheriff Lopez with a framed print of the blessing from a scripture in the bible, Numbers 6:24-26 that reads: “May the Lord bless you and keep you. May the Lord make His face to shine upon you, and be gracious to you. May the Lord lift up His countenance upon you and give you peace.”