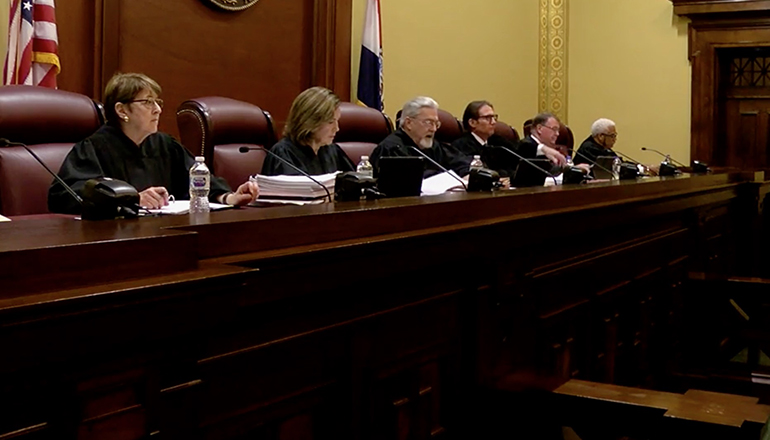 (Missouri Independent) – After an eight-year fight over Medicaid expansion, the arguments are over.  The question of whether 275,000 people will receive state-paid health care coverage is in the hands of the Missouri Supreme Court.

Oral arguments took place Tuesday in an expedited appeal. The seven judges must decide whether Medicaid eligibility will expand, as directed by the constitutional amendment approved by voters, or, as Cole County Judge Jon Beetem ruled, if it was fatally flawed because it did not include a new source of revenue to pay the anticipated costs.

The court’s only other option, suggested by Attorney General Eric Schmitt’s office in its final written brief, is to leave people eligible for coverage without actually providing it unless lawmakers explicitly fund it.

While there is no deadline for the decision, the expedited schedule indicates the court will rule soon, because coverage was supposed to start July 1.

“What is at stake here is life-saving health care,” Joel Ferber, director of advocacy for Legal Services of Eastern Missouri said to reporters after oral arguments concluded. “Our lead plaintiffs and our clients are desperate for the health care they need.”

In the days and hours leading up to the oral arguments, the judges received plenty of advice on how they should rule. The final written arguments from Schmitt’s office, which wants the court to uphold Beetem, were filed Friday. Friend-of-the-court briefs, along with the final filings from the plaintiffs seeking an order in favor of expansion, were being filed as late as Monday afternoon.

The court, however, heard only from John Sauer, representing the state, and Chuck Hatfield, representing three women who sued when Gov. Mike Parson announced the state would not open enrollment for the expansion group.

Amendment 2, passed last August opened Medicaid eligibility to adults ages 19 to 64 who earn less than 138 percent of the federal poverty guideline. Sauer told the court that while that group is eligible, lawmakers control state spending and did not make room for them in the budget.

Reading the same appropriation bills, Hatfield found a different interpretation. While the spending bills didn’t include the estimated $1.9 billion to cover the expansion population, he said there is money for every service available under Medicaid and there are options to control spending that would provide coverage for everyone eligible.

“The legislature must, of course, follow the priorities the people put in the constitution,” Hatfield said.

The path from passage of the Affordable Care Act in 2010, with a requirement that states expand Medicaid coverage, to Tuesday’s arguments, has been dominated by politics, with Democrats and their supporters pushing the state to go along and Republicans just as strongly resisting.

Then-Gov. Jay Nixon first asked lawmakers to expand coverage in 2013, but there was never a realistic chance the Republican-dominated General Assembly would go along.

Passage of Amendment changed some minds, but not enough. Parson, who opposed Amendment 2, put money for the anticipated costs in his January budget proposal. When the final vote on funding came in May in the Missouri Senate, only four Republicans joined 10 Democrats in support of Parson’s request.

Since 1945, the Missouri Constitution has prohibited initiatives that require appropriations if the same ballot measure does not generate the needed revenue. That is why Beetem ruled Amendment 2 is invalid, writing that because it requires the state to spend money, it is unconstitutional.

“How is it you can look back on an election that is past and decide it is invalid?” Judge W. Brent Powell asked Sauer. “How long can you continue to do that?”

“That is not our argument,” Sauer replied.

In his brief for the state, Sauer of the attorney general’s office argued that the judges have only two choices – find that Amendment 2 is valid but subject to appropriation, or that it was not validly enacted.

“This conflict is real, and it stubbornly resists plaintiffs’ belated attempts to explain it away,” Sauer wrote.

Last year, the court decided lawmakers could not use appropriation bills to make Planned Parenthood ineligible to provide Medicaid-paid family planning services. Sauer asked the court to overturn that decision and allow lawmakers to determine which legally eligible people will and will not receive Medicaid coverage.

The judges don’t have to stretch logic that far, Hatfield argued. The three women who initiated the lawsuit are eligible, the legislature appropriated money for every service provided by Medicaid and therefore they cannot be denied, the attorneys wrote.

“This court has consistently held that every doubt, and every ambiguity, should be resolved in favor of upholding the will of the people,” Hatfield said.

The governor has various methods to control spending and though some may be painful, the options are real, Hatfield said Tuesday.

In the brief filed Monday, Hatfield and his co-counsels in the case wrote that the program’s cost, whether for traditional Medicaid or the expansion population, is uncertain every year, they wrote.

First, no one has any idea whether the amount of money the General Assembly appropriated is too much, not enough, or just right, they wrote. “The number of enrollees in the MO HealthNet program fluctuates from year to year, as do the quantity and types of services used.”

The amicus curiae, or friend of the court, briefs have come in from conservative groups, health care providers, backers of Amendment 2, and lawmakers. There’s even a secondary dispute, with Missouri House Democratic Leader Crystal Quade of Springfield and Assistant Democratic Leader Richard Brown of Kansas City asking the court to reject, or at least ignore, the brief filed in the name of the full House.

The stakes are enormous, both for those who would receive coverage and for the state’s treasury.

In the brief for the state’s 12 Federally Qualified Health Care Centers, which serve 600,000 patients, Jim Layton, formerly the state’s top appellate attorney, wrote that it is essential that the clinics serve paying patients to support their work for those without insurance.

Of the people using them, he wrote, 46 percent are on Medicaid already and another 25 percent are without insurance. Many of the uninsured would receive coverage, he wrote, and lawmakers funded all services provided by Medicaid.

“But the General Assembly cannot, merely by changing a dollar figure in a line of an appropriation bill, change a parameter of the program that was constitutionally defined by the people by initiative, any more than it can, by changing a dollar figure or including a proviso in an appropriations bill, change eligibility for any other program,” he wrote.

Before passage of Amendment 2, Missouri was one of 14 states that had not yet expanded Medicaid under the 2010 Affordable Care Act. The law originally made expansion mandatory but the U.S. Supreme Court ruled in 2012 that penalty provisions that made Medicaid an all-or-nothing program were unenforceable.

Amendment 2 extended coverage to people aged 19 to 65 with household incomes less than 138 percent of the federal poverty guideline, or $17,774 a year for a single person and $36,570 for a household of four.

Under the current Medicaid program, adults without children are not eligible unless they are blind, have another qualifying disability, or are pregnant.

The traditional Medicaid program is expected to cost about $12 billion in the current fiscal year.

In his January budget proposal, Parson estimated the total cost of expansion at $1.9 billion, with $130 million from general revenue, $1.65 billion from the federal treasury, and the remainder from taxes on medical providers.

If Missouri does expand Medicaid coverage, it will become eligible for additional support for the traditional program estimated to save the state $1.2 billion over two years.